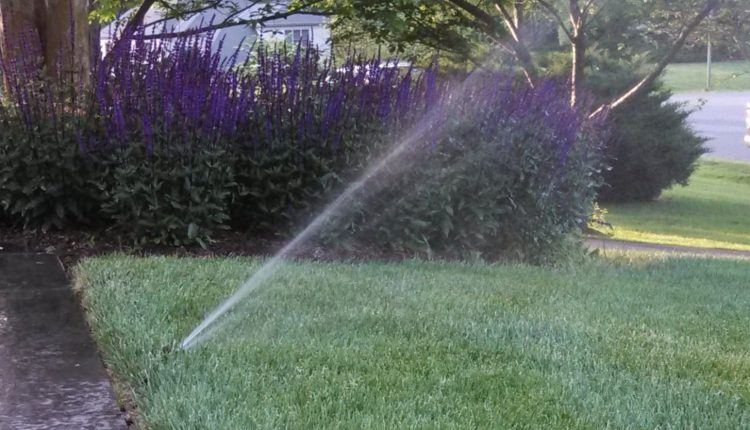 A sprinkler system can help the grass beat the heat, but it requires an investment

Like many Washington area homeowners, Don and Cathy Ewan watched their lawns turn from rich green in spring to blotchy brown in summer each year.

As the temperatures climbed above 90, they spent hours almost every day watering with hoses and a multitude of sprinklers that they kept moving to cover the two-level area of ​​the four-acre property surrounding their colonial in Vienna.

By August they would get tired of the routine and largely give up their struggle with Mother Nature.

But two years ago – after numerous flowers were planted in their garden, including crepe myrtle, dogwood, birch and maple – they decided it was time to invest in an automatic sprinkler system. It took way too long to hand water everything. And while they were doing the back yard, they decided to extend the system to the front yard.

In August the lawn was “green. You could walk on it and it felt good and looked good too, ”said Don Ewan. “The lawn looked as good as it ever looked.”

With the flowers and trees, he said, “it’s like our own little resort. It’s just beautiful. “

Automatic lawn sprinklers are commonplace in the southwest, where temperatures fluctuate around 100s for days and homeowners can use them most of the year – but not so much in this region.

Many Washington area homeowners consider it a fact that their lawns turn brown in the summer. To them, an automatic sprinkler system, which can cost $ 3,000 and more, can seem like an unnecessary luxury.

But sprinklers aren’t just for homeowners who care about the look of their lawn. The systems are becoming more attractive to busy homeowners who don’t have time to water their lawns with hoses, and to conservationists who are interested in new technologies to use water more efficiently.

Additionally, some real estate agents say that a sprinkler system could be a good idea for a homeowner who is listing a property in the summer and trying to make a great first impression on potential buyers.

“The curb appeal adds to the beauty [of the home] trying to get top bucks, ”said Cynthia T. Davis, a Long and Foster real estate agent who sells homes in the district and Maryland.

“A well-tended lawn can be a sign that [to buyers] that the inside is also preserved, ”said Davis. “It makes you want to go in.”

Homes with lush lawns and sprinkler systems usually get a little more on resale, agents say. “It adds value,” said Lawrence M. Calvert, an agent for TTR Sotheby’s International, who sells homes in the district and northern Virginia.

“If you have two identical houses and one has a sprinkler and a green lawn and the other doesn’t, [owner] with the lush lawn will . . . got a few thousand dollars out of it. ”

The two most common types of lawn in the area are fescue fescue and Kentucky bluegrass. The fescue generally has a deeper root system and tends to do better in the summer months, according to Mark J. Carroll, associate professor of turf grass science and management at the University of Maryland.

However, when the humidity is high, there is little rainfall and temperatures above 85 degrees, the fescue fescue comes to a standstill. Without aggressive watering, many lawns will experience drought stress in July. The dry areas spread out and the lawn often only recovers in autumn or the following spring.

“It doesn’t die. It just rests, ”said Carroll. “When it rests, it creates open areas that weeds can enter when it gets really dry.”

Finding the right balance to maintain a healthy summer lawn can be tricky. If you water the lawn too little, it will suffer from drought stress. Water it too much and you can get fungus and diseases that can weaken it.

The task is made even more complicated by the region’s characteristic mix of sandy and rocky soil and marine clay, a combination that makes it difficult to achieve a healthy balance of water and oxygen at root level.

Most people water their lawns often and at short intervals. Experts say that the opposite is required: lawns should be watered less often and deeper.

Automatic sprinklers are designed to take the guesswork out of watering, say lawn care experts.

The systems are installed in stations that maximize water flow to desired areas of a property and minimize water waste on driveways and roads, a problem with poorly positioned sprinklers. Sprinkler heads aimed at shrubs and flowers pop higher than those designed for watering lawns, which generally shoot longer streams to travel greater distances.

“The most important thing a homeowner needs to watch out for is that you don’t want to walk [the sprinkler system] blindly three times a week with the same amount of water, ”said Ken Duffy, president of Geoscape, a landscaping and construction company in Oakton.

“If a homeowner can walk around the garden and watch the water demand, they can save water and money,” he said.

The latest technology enables a homeowner to program specific area irrigation based on the microclimate. Sensors built into the system switch it off or prevent it from operating when it rains.

The system “also measures sunlight and temperature,” said Duffy. The wireless controller, he said, “allows the system to adjust based on the conditions it senses.”

Automatic sprinklers generally cost between $ 3,000 and $ 20,000, which can be a disadvantage for some potential buyers.

In addition, the installation requires digging trenches in the lawn. The system is prone to underground leaks and can be damaged by lawn mowers hitting the sprinkler heads. And it requires constant maintenance, like blowing out the water in the pipes in the fall, so the pipes don’t freeze and crack in the winter.

But for some people a sprinkler system is worth it.

Christian Müller, a doctor, said that two years ago he left a distressed house on an 11th floor. bought / 2 acre property in Oakton, based in part on the fact that it has an automatic sprinkler system.

“We lived in Falls Church before and it was a royal pain . . . to make the lawn look beautiful, especially in summer. The fact that [the house had the sprinkler system] was certainly a selling point for me, ”said Müller.

“The lawn is close to my heart,” said Mueller, who spent an additional $ 3,000 on upgrading the sprinkler system. “I can come home and say, ‘The lawn looks well watered and nice’ and I can spend time with my kids and not have to run outside” to move the water hose. “It’s a great peace of mind to know this is okay.”

Saskatoon experts give 5 tips on a green, healthy lawn this spring