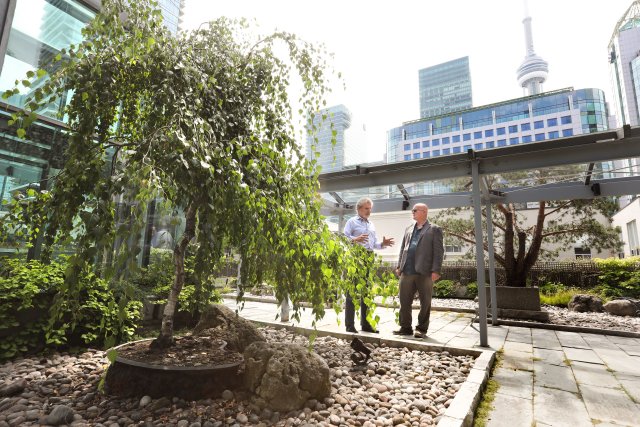 A Vertical Forest Is Proposed in Toronto, Canada | Cities

TORONTO – Many Canadians start their summer days in an idyllic setting, drinking their morning coffee among trees, shrubs and other plants while watching birds nest nearby. But these people are in the country or in the suburbs, not just steps away from noisy, crowded streets and teeming office towers.

That could soon change in Canada’s largest city.

A Toronto-based company, Brisbin Brook Beynon Architects, has unveiled a proposal to build a 27-story condominium building that spans an entire city block in downtown Toronto. The building would slope towards its top, creating huge terraces with about 500 trees. The vegetation would serve a basic rather than decorative purpose: to reduce the city’s overall carbon footprint.

The building on Designers Walk, an upscale commercial area, would be Canada’s first “vertical forest” – and one of at least a dozen architectural projects of this type that are completed or under construction worldwide. Proponents say these buildings are good for the environment and have the potential to change the way of life of millions of city dwellers. Critics have expressed doubts about their environmental contributions and sustainability.

Over the past decade, population growth in metropolitan areas has increased dramatically. According to the UN, a little more than half of the world’s population now lives in urban centers, and by 2050 it should be 68 percent. As a result, construction is booming and green spaces are disappearing, negatively affecting the climate, air quality and living conditions in cities.

Some architects have recognized the need for innovation and turned their attention to biodiverse urban landscapes. The most famous is the Italian architect Stefano Boeri, whose office Stefano Boeri Architetti led the creation of the world’s first vertical forest: Il Bosco Verticale, two residential towers that opened in Milan in 2014.

The towers, which are around 120 meters and 250 meters high, house a total of 800 trees – some up to 9 meters high -, 4,500 bushes and 15,000 other plants. The buildings have geothermal heating and other energy efficient facilities, and are also home to countless insects, including bees and hoverflies, and hundreds of birds.

The design and construction of Il Bosco Verticale were complex. Gardeners selected the types of plants that would thrive in Milan’s climate and worked the soil, while wind power experts took steps such as testing the planters in wind tunnels to make sure the trees would stay in place. Today, four years after the project was completed, height pruning specialists are taking care of the pruning of the plants while others oversee the automatic irrigation system and ensure the optimal performance of the entire building system.

Boeri and other vertical forest proponents say their plant systems counteract the negative effects of urban microclimate; Your foliage cleans the air by taking in carbon dioxide and small particles while releasing oxygen. Boeri says Il Bosco Verticale absorbs 30 tons of carbon dioxide and produces 19 tons of oxygen per year.

“The people who live in these buildings feel connected to nature,” says Brian Brisbin, director at Brisbin Brook Beynon Architects in Toronto. “Being surrounded by trees in an oxygen-producing environment has a dramatic impact on overall wellbeing and happiness.”

In Toronto, the proposed vertical forest could also support Mayor John Tory’s plan to significantly expand the city’s canopy to cover 40 percent of the city.

In recent years, several other architectural firms have proposed or built urban forestry structures – each with design, foliage, and animal life appropriate for a particular climate.

Boeri has developed vertical forest designs in several European cities, including Paris; Treviso, Italy; Lausanne, Switzerland; and Utrecht, Netherlands, among others. He is also developing tree-lined buildings in several Asian countries. In China, urban forest projects are planned in cities like Nanjing, Shanghai and others.

The first, a 19-story building in Eindhoven, the Netherlands, is set to become the first vertical forest for social housing. Residents from low-income groups will live in a 240-foot skyscraper whose facade will house 125 trees, 5,200 shrubs and more than 70 other plants.

In Liuzhou, a city in southern China, Boeri has driven the development of an entire “forest city” that is expected to be completed within two years. The 432 acre area will be home to wooded office buildings, homes, schools and hospitals.

In Toronto, Brisbin’s team, which includes architects, foresters, landscapers and a property developer, is awaiting final city approval next summer.

“We developed the science and delivery system and are now working on a maintenance manual,” says Brisbin, who once rented an Airbnb in Il Bosco Verticale to learn more about the inner workings of the towers. “Everything is ready to go.”

Assuming the plan is approved, the University of Toronto and the Vineland Research and Innovation Center, an Ontario-based research organization devoted to horticultural science and innovation, will select the trees for the Designer Walk building and two Maintain installation years earlier. You will later monitor the building’s water and soil nutrient density to see if the building’s microclimate matches the vegetation.

Some individuals and organizations have raised concerns about vertical forests.

Lloyd Alter, associate professor at Ryerson University School of Interior Design in Toronto, says that vertical forests use more concrete than conventional buildings and that concrete generates 5 to 7 percent of the carbon dioxide produced worldwide. “It would take a hundred years for the trees in one of these structures to offset the building’s carbon footprint,” he says.

Alter, who is also the design editor of Tree Hugger, a blog focused on sustainability, is also concerned that the planters in vertical forests are not large enough for the trees to survive long term.

The Council on Tall Buildings and Urban Habitat, a U.S.-based nonprofit that focuses on the building, design, construction and operation of high-rise buildings, has also raised concerns about the survivability of trees in vertical forests.

“These trees are being taken out of their natural habitat,” said Antony Wood, CTBUH Managing Director in 2015. “The higher-lying trees – which are exposed to high wind speeds and various environmental pressures – are more polluted than the lower-lying ones. What we don’t know is the long-term effects on the trees themselves. “

Alter says maintenance is also an issue. “In some cases, people are pushing off the sides of these buildings to preserve the trees,” he says. “How much does it cost? How much does maintenance cost in total? Is it worth it?”

Landscape architect Robert Wright believes it is. Wright, Dean of the University of Toronto’s Forestry Faculty, is part of the team behind the proposed Designers Walk building. He admits vertical forests will not end climate change but remains steadfast in his support.

“The densification of our cities is important,” he says. “If we don’t make our cities more dense, we’ll end up taking up more space. For example, we’re building on wetlands and damaging our environment.”

He notes that there will be a tall building on the Designers Walk site regardless of whether it has trees.

“If it’s not a vertical forest, it will be a conventional building,” he says. “The question is, would building with or without the ability to increase biomass, biodiversity and canopy cover be better?”