We’re in an age of plant-based diets, organic grocery stores, and farm-to-table restaurants. But if you observe the average American lawn, and how it’s cared for, it would seem like there’s no alternative to the industrialized, highly chemical-dependent agricultural practices of the ’50s.

Sunday, a new startup focused on organic fertilizer and chemical-free lawn care, wants to bring the millennial-friendly, direct-to-consumer model to the nation’s nearly $48 billion landscaping and lawn care industry. Subscribers can order fertilizer that’s organic, sustainable, and customized based on the homeowner’s address, or pesticide-free weed control products with names such as Weed Warrior and Dandelion Doom.

“People eat all-organic food, and then their backyard is like a superfund site,” says CEO and founder Coulter Lewis.

Subscribers can order fertilizer—customized based on the homeowner’s address and photos of the lawn and mailed in plastic pouches—or pesticide-free weed control products with names such as Weed Warrior and Dandelion Doom. Courtesy Sunday

It’s the latest spin on an established consumer brand that hasn’t, for the most part incorporated modern design or experienced a contemporary facelift. Considering one of the larger brands in the market, Roundup, is the subject of a series of class-action lawsuit alleging its products cause cancer, there does seem to be room in the market for a competitor.

Lewis, who previously worked at the design consultancy Ideo and launched his own snack food startup, was inspired by a trip to Home Depot in 2017. Walking by the pallets of lawn products, including chemical fertilizers and pesticides (including agriculture, the US dumps roughly a billion pounds of pesticide on the ground every year), he had what he called an “Erin Brockovich moment”: Should we be putting these kind of chemicals on our lawns and near our homes? And is there an opening for a company that can provide a better solution?

He decided to take his design experience and develop an alternative to products like Roundup. Created in tandem with Frank Rossi, a Cornell professor who now serves on as the company’s Chief Science Officer, the company’s fertilizer system uses data to optimize lawn care. Lewis called the traditional system “brute force,” in that fertilizers and weed care are made, for the most part, to be one-size fits all.

The Sunday system uses a soil sample, photos, and location data to pinpoint what each lawn needs and how to help it grow with an optimized mixture of nutrients, such as seaweed, molasses, and food waste. The year-long subscription, which sends four boxes to a customer each year like a kind of Blue Apron for your backyard, tailors the ingredients, amount, and even date of delivery to maximize its impact. Lewis recalls experimenting with chemicals in his own backyard in Boulder, Colorado, where the company is based.

“This space looks like the organic food space 30 years ago,” says Lewis. “There’s so much room to expand and grow.” 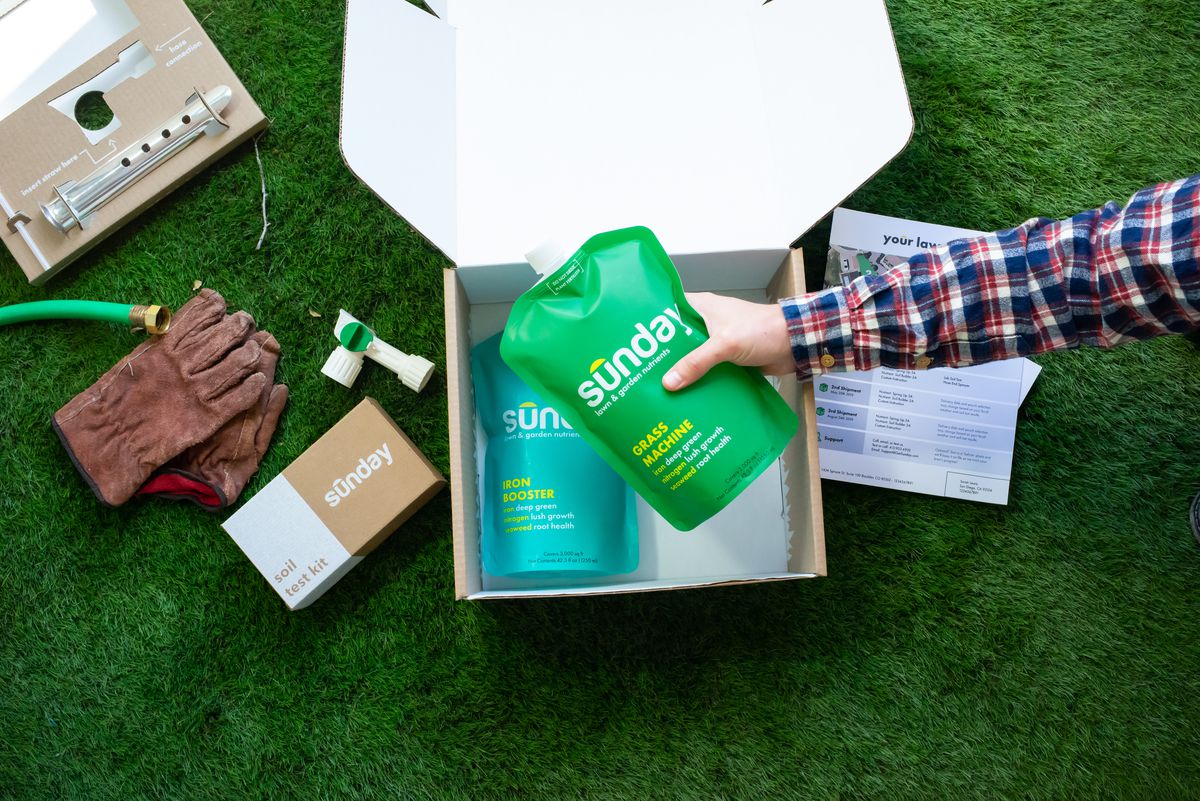 The Sunday system uses a soil sample, photos, and location data to pinpoint what the lawn needs and how to help it grow with an optimized mixture of fertilizer: the year-long subscription tailors the ingredients, amount, and even date of delivery to maximize its impact. Courtesy Sunday

Lawns, taken together, are the nation’s third-largest crop, covering a full 2 ​​percent of the nation’s land area. Spraying chemicals over that much acreage, combined with the chemical run-off from conventional agriculture practice, adds significant amounts of chemicals to our water supply. Sunday uses organic weed killers⁠—Weed Warrior acts like a “soap” and washes the moisture-retaining wax layer off a plant, while Dandelion Doom utilizes a large dose of iron to kills weeds⁠—based in part on techniques developed in Canada, where products such as Roundup are banned. Sunday weedkillers use natural ingredients, such as iron, instead of chemicals. Courtesy Sunday

In 2018, Sunday started with a beta test on 100 lawns across the country, and launched the product in April. So far, it has customers in all 50 states and service “thousands of acres of lawn” (the company wouldn’t give exact sales numbers). For consumers who order the Sunday fertilizer online, it costs $129 to $189 per year, depending on the size of the lawn and $24 for a mixed pack of the two weed killers. The average American homeowner spends $503 annually on lawn and garden products.

The company, which already raised $9.2 million in two rounds of funding, has attracted venture capital funding from investors such as Forerunner and Tusk Ventures, who have previously backed other direct-to-consumer brands like the modern luggage brand Away.

The direct-to-consumer brand revolution normally has a target demographic in mind, urban, upwardly mobile, and millennial. Sunday, the first direct-to-consumer lawn care company, has a slightly larger target. There are 90 million American homes, and most of them have a lawn.

“We’re targeting the 95 percent of America that has lawns, and not the 5 percent that’s in coastal cities,” he said. “I’m excited we’re addressing such a broad base of consumers. Our biggest state in terms of customers was Texas so far, and we didn’t expect that.”