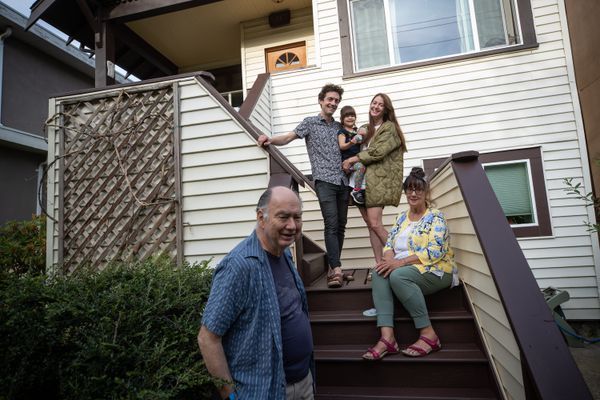 Michelle Cyca, back right, her husband Luke Cyca and daughter Maeve with her parents Stephen Reid and Melanie Reid at her childhood home in Vancouver, where they all live.DARRYL DYCK/The Globe and Mail

Every morning, before his three-year-old granddaughter heads to daycare, Stephen Reid is waiting at the bottom of the stairs to wish her a good day. Unlike many grandparents, Mr. Reid hasn’t had to forgo seeing his only grandchild during the pandemic. In fact, he’s spent time with her nearly every day of her life.

This is possible because Mr. Reid and his wife, Melanie, have lived with their daughter Michelle Cyca and her family for the past three years in Vancouver. Their living arrangement allows the Reids to provide child care in a pinch. Likewise, Ms. Cyca and her husband have been there for her 71-year-old parents, who both deal with chronic health and mobility issues. In the early days of the pandemic, the younger couple did all the grocery shopping. When a light bulb needs to be changed, or the lawn requires a fresh cut, they’ll take care of it.

This is all possible because the family has chosen to live in a multigenerational home, defined as a household that includes three or more generations of the same family. It’s a way of living that was common in Canada before the Second World War and seems to be making a return amid the country’s high home prices, changing cultural fabric and aging population.

Multigenerational living won’t solve Canada’s housing crisis. Indeed, critics have emphasized for years that millions of new homes must be built to address affordability. The Canada Mortgage and Housing Corporation (CMHC) recently joined that chorus. But if governments make it easier for extended family members to live together, through zoning, tax breaks or municipal deregulation, this way of life could help to address the country’s housing shortage and save Canadians money, experts say.

According to new census data released last week by Statistics Canada, the number of homes shared by multiple generations of a family, two or more families, or one family living with unrelated individuals has grown by 45 per cent in the past two decades. This household type now represents 7 per cent of all homes in Canada.

Communities with sizable South Asian populations, such as Brampton, Ont., and Abbotsford, BC, often have higher rates of multigenerational homes. In Brampton, nearly 30 per cent of children under 5 live in a household with grandparents, while in Abbotsford-Mission that figure sits just above 20 per cent, according to the new census data.

Multigenerational living also appears more prevalent among indigenous households. In Nunavut, where the vast majority of the population is Inuit, one-third of children below 4 live with at least one grandparent.

Margo Hilbrecht, executive director of the Vanier Institute of the Family, expects Canada will see the number of multigenerational homes continue to rise.

“As a society, we’re going to have to respond and adapt to it with the type of housing that’s being made available,” she said. 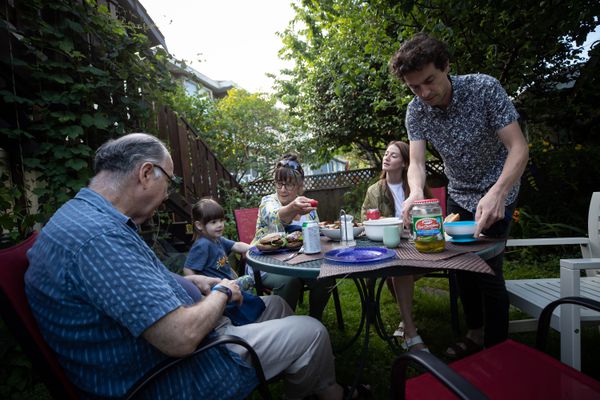 The family have dinner in the backyard of their shared home.DARRYL DYCK/The Globe and Mail

In recent years, real estate professionals have noticed a rising interest in in-law suites, with some developers now offering condos and custom-built single-family homes geared toward multigenerational households. Laneway homes, another option for multigenerational living, are also beginning to tick up in cities that allow them. Minutes from where Ms. Cyca lives, one of her friends is raising her family in a laneway house on her parents’ lot.

“I’ve really come to be an evangelist for this kind of living arrangement,” Ms. Cyca said. “We have a nice interdependence that feels really supportive.”

The arrangement has also allowed the 35-year-old writer to raise her daughter in a house in Vancouver – the very home where she herself grew up – where house prices have soared in recent years. “The idea of ​​having a yard always felt impossible,” she said.

That changed in 2018 when her parents asked if she and her husband would like to rent the second floor of their two-storey home in Kerrisdale. The young couple was living in a studio apartment – ​​not exactly in an ideal place to start a family. Meanwhile, the stairs and upkeep of the Kerrisdale home had become a challenge for Mr. Reid, who had Parkinson’s disease. After some back and forth, they decided to go for it.

If you’re wondering – yes, there were growing pains. Establishing clear boundaries is a must, Ms. Cyca and her mother both attested. Separate entrances and amenities are a big part of that; the only space the whole house shares is the laundry room and backyard. Ms. Reid admits to missing all the extra room, and her cat refuses to accept the territory he’s lost to the younger couple’s pet. But “on the whole, this is better than what we had before,” she concluded.

Based on recent American research, the share of people living in poverty is slightly lower in multigenerational households. Not only do families generally save money on child and elder care, adults can pool funds to cover mortgage payments, property taxes, utilities, maintenance and repairs. In the Cycas’ case, they can save more than they could elsewhere because they pay below-market rent. Groceries also prove less expensive through bulk buying. (Ms. Reid is a Costco enthusiast.) 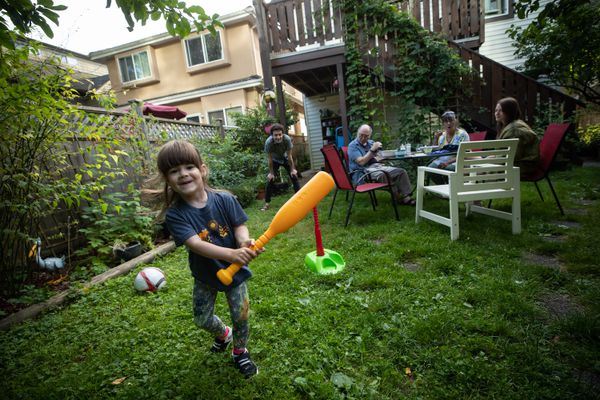 Mr. Cyca plays with his daughter as the family looks on.DARRYL DYCK/The Globe and Mail

With a dire and growing need for more housing in Canada, some governments may now recognize multigenerational living as part of the solution, albeit a small part. In June, the CMHC said Canada needed to build 5.8 million more homes by the end of the decade to improve affordability – 150 per cent more than currently projected.

“My fear is that municipalities do not recognize their role here,” he said. “Their primary focus is on districting, rather than permitting supply.”

Ms. Cyca acknowledges this setup won’t work for every family. The main reason it does in her case: Her family genuinely likes spending time with each other. And so far, she said, the most rewarding aspect has been the moments her daughter has shared with her grandparents.

“I didn’t really imagine that it would be possible for her to have the same kind of childhood I did,” she said.

Are you a young Canadian with money on your mind? To set yourself up for success and steer clear of costly mistakes, listen to our award-winning Stress Test podcast.