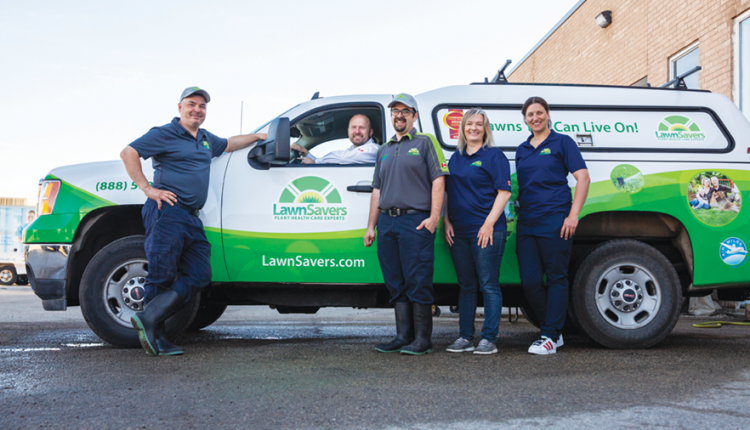 Kyle Tobin, seated in truck, and his team at LawnSavers had the highest score in Lawn & Landscape’s Best Places To Work.

Lawn & Landscape partnered with the Best Companies Group to find out who are the Best Landscape and Lawn Care Companies To Work For. Best Companies Group surveyed employees on the following areas: leadership; corporate culture and communications; role satisfaction; work environment; relationship with supervisor; training, development and resources; pay and benefits and overall engagement. The companies below met the score requirements to be on the list.

Rotten Tomatoes gives the 1989 horror-comedy film Prom Night III: The Last Kiss a paltry 16%, but at the time for Kyle Tobin, it seemed like a significant stepping-stone toward a dream come true.

Never mind the summer work he and his friend did at their startup company Starving Students; their dreams of six-pack abs and sold-out music venues had not yet been dashed. The odd jobs they picked up throughout the summer, like digging holes or planting trees, were simply means to an end for their rock band, Chaos. Tobin worked out of the back of a 1983 hatchback by day and played the drums by night. So many rock-and-roll artists at the time made poolside music videos, so Tobin envisioned himself in those, too, while he cleaned neighbor’s pools.

In the end, Chaos’ biggest break was when their music appeared in Prom Night III. Songs like “Angels” and “Bump and Grind” will forever be etched into the film’s soundtrack. Tobin, who eventually studied political science at King’s University College, decided he no longer wanted to be a “Starving Student.” He wanted to go all in on the green industry.

“Very few people wake up and say, ‘Hey, I want to be in the lawn care industry for the rest of my life,’” Tobin admits, adding that so many things kept drawing him back into the green industry despite his rock- Star aspirations as a teenager. “I said, ‘You know what? Stop acting like you’re getting out of the business and start acting like you’re staying in it. If you’re going to be in it, be all in it.”

For Tobin, going “all in” meant establishing LawnSavers Plant Health Care, which is now a 17-person team serving the Greater Toronto area in Canada. It provides lawn care, tree/shrub care, mosquito control and holiday lighting, among other services.

And, for reasons largely stemming around company atmosphere, the company was selected for Lawn & Landscape’s Best Places To Work.

“You feel good when you leave at the end of the day just because of the environment you’re in,” says Stacey Atkins, the company’s operations team lead. “It’s an environment where we really do encourage the best out of everyone and help them achieve it.”

For years, Tobin heard other intelligent leaders at green industry companies tout ways to improve company culture. But Tobin never quite grasped the concept that same way – it almost bothered him that some companies were trying to manufacture it.

“Culture is what exists whether we do something about it or not,” Tobin says. “When I finally got my head around it, I was like, ‘I’ve got to encourage start and providing the right environment for it to grow.'”

Everyone has the same access to tools like career ladders and generic onboarding materials, Tobin says. He believes that what has really separated LawnSavers from competing companies is the way his team listens to one another.

Giving everyone a platform to share opinions proved difficult at first. For a while, Tobin tried doing Tailgate Tuesdays, where he couldn’t get employees there on time or even attentive since they were trying to meet at 6:30 in the morning. Then, COVID-19 essentially killed those meetings, as they pivoted to remote meetings.

Now, Tobin will meet with his production team at 10:10 in the morning every day. His team will stop what they’re doing out in the field and log in using Google Meet, sharing their wins for the day in the huddle that can’t run longer than 10 minutes. Tobin initially thought the daily interruption might irritate his technicians, but it proved to be effective instead. With the customer success team, he meets at 8:38 am, where they also go over wins and goals for the day.

He started to notice team buy-in, language and decisions that centered around the team’s future, not just getting the job done for the day and heading home.

“It becomes more about ‘we’ and ‘us,’” Tobin says. “When people start using those words, you know they’re buying in.”

Marc Rochette can voucher for that buy-in. He’s been with LawnSavers for nearly two years, as he initially moved from Ottawa to Toronto for a fresh start in business. He planned on taking a job at LawnSavers as a one-year stopgap between his prior position and his next one, which he envisioned as a corporate position downtown.

But Tobin sat down with Rochette and asked good questions — questions that weren’t just about business. They seemed pointed more so at getting to know Marc as a person. Now, he’s been promoted to a sales manager role, and Rochette says staying at LawnSavers was the best decision he could’ve made.

“(Kyle) really showed that he really cared about all of his employees. He’s been the best boss that I’ve had,” Rochette says. “For that reason there, I wanted to be here longer. I just knew there was something special here. Kyle took me under his wing.”

And all the employees care for one another, too. Stacy Root, one of the company’s only full-time remote employees, works as the team’s customer success advisor. She says the company values ​​personal development so much that employees constantly share books and podcasts.

“Our in-house training plan is comprehensive and never stops,” she says. “I learn new things every day.”

That training benefited Atkins greatly. She hopped aboard LawnSavers in 2008 and knew nothing about the industry.

“When I started, I didn’t know anything about grass other than it grew on the ground and that once in a while, you mowed over it,” she says. But Atkins stayed because the team felt like a family to her. Even now, during the pandemic, the team shifted from its standard Christmas parties and company barbecues to themed bag giveaways, where employees could come in on their own time and take bags filled with goodies that centered around that event’s theme. She remembers a fiesta bag, a pool party bag and a barbecue bag. “I would say we’re very teamwork oriented. If someone’s having a bad day, I don’t have to ask anyone to help someone else out,” Atkins says. “I really do appreciate that amongst the technicians.”

What also kept Atkins invested in the company was that she felt the company had genuine connections with the clients. Tobin himself believes the biggest thing he’s noticed with clients is that the days are gone where clients grew up with expansive lawns and white-picket fences. Some clients have grown up in condominiums, or maybe they’re originally from a dryer part of the world where “rock lawns” are significant.

Atkins believes LawnSavers is working in the customers’ favor by ensuring the relationship isn’t just about a cash-and-services exchange.

“I really do like the fact that everything we do is with the customer in mind,” she says. “We’re not just providing a service for cash. We want them to get a benefit out of what we do.”

That benefit, according to Tobin, is in sharing the knowledge. Even if there are times when they have to manage a client’s expectations of a perfect lawn, or if it comes down to a client balking at price, Tobin says they take the time to educate consumers.

“Plants are biology. We just need to keep communicating our participation message and our knowledge that we have inside of us,” he says. “Anybody can spread fertilizer, but there’s a reason people choose us. They choose us for our knowledge.

“I think our industry goes wrong guaranteeing everything will always go perfectly,” Tobin adds, “and we pretend that somehow we can wave a magic wand and teach people it’ll all be okay.”

Rochette says even when they have to temper expectations, or if his team needs to deal with a dissatisfied client, he tasks the team with doing so with optimism.

“It starts with smiling on the phone. You always want to be happy because that smile echoes through to the customer,” he says. “We want to listen to the customer and make them feel heard.”

Tobin still has his drums set up in his basement, but he doesn’t have a chance to play it that often. All three of his kids all do music. And though he’s not selling out arenas or filming music videos at the pool, he can acknowledge now that his band had a good run. There’s even an ode to the company’s Starving Students days, as a lifesaver ring buoy is prominently featured in the company’s current logo.

“I still dream of being a rock star,” Tobin jokes.

It’s this same nostalgia that drove Tobin to apply LawnSavers to appear in Lawn & Landscape’s Best Places To Work list. Even with areas for improvement, he wanted to recognize their areas of success, too.

“We’re never finished getting better, but when you stop to look around, I realized maybe it was time to smell the roses a little bit,” Tobin says. “We don’t have millions of dollars in branding available to us. We’re a small company. This is something that matters to the right people and the people we want to work with.”

The author is associate editor at Lawn & Landscape.

How to fertilize a lawn: an expert guide

Ticks and Lyme disease are on the rise in Canada. Here’s why