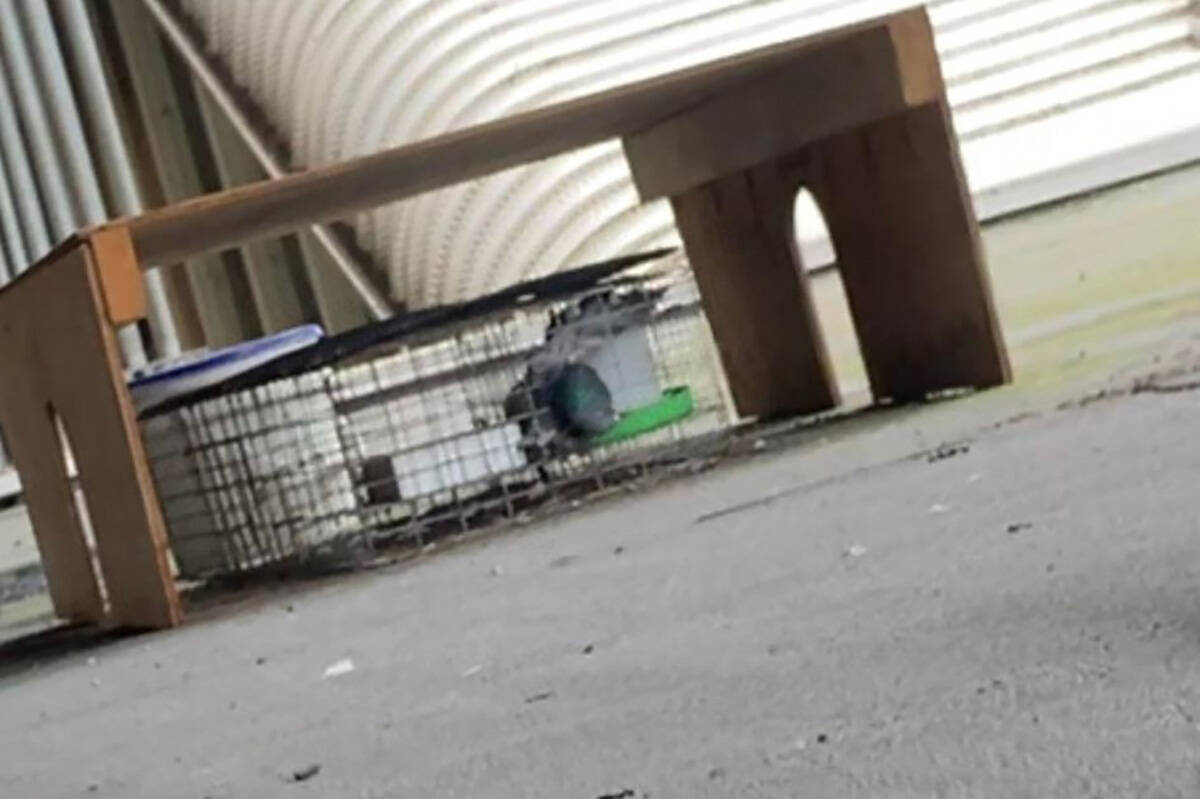 An image commuter Zahra Ahmdz says she took at the Stadium-Chinatown SkyTrain station on March 22, 2022 appears to show a pigeon dead inside a cage. (Credit: Zahra Ahmdz)

An image commuter Zahra Ahmdz says she took at the Stadium-Chinatown SkyTrain station on May 16, 2022 appears to show a pigeon dead inside a cage. (Credit: Zahra Ahmdz)

An image commuter Zahra Ahmdz says she took at the Stadium-Chinatown SkyTrain station on Aug. 10, 2021 appears to show a pigeon dead inside a cage. (Credit: Zahra Ahmdz)

A number of pigeons found dead in traps along SkyTrain routes in Vancouver have sparked concern from the public, but the pest control company that runs these traps says it has nothing to do with neglect.

Commuter Zahra Ahmdz started a petition against transit operator TransLink in the summer of 2021 after noticing the traps inside the Stadium-Chinatown station on her way to work, and what she said was very clearly multiple dead pigeons inside.

“It was very, very shocking. I didn’t think this would happen in Canada,” she said.

The traps are one of several methods TransLink uses to control the population of pigeons at SkyTrain stations, but the birds are never supposed to die inside. TransLink hires a pest control company to check the traps once a week, ensure there is adequate food and water inside and humanely kill any birds captured.

Media relations advisor Thor Diakow said it’s possible some pigeons did die inside the cages last summer, as TransLink was between pest control companies and didn’t maintain the cages themselves in the meantime.

Ahmdz said the problem didn’t stop there though.

Photos she said she took in March and May appear to show more dead pigeons inside the cages. And Ahmdz said after she complained to TransLink and the BC SPCA, small barriers were erected making it more difficult for her to see the birds.

“This is cruelty,” Ahmdz said.

The pest control company in charge of the cages disagrees. Atlas Pest And Wildlife Control has been working for TransLink since around November or December 2021, according to its president Raymond Arthurs. He readily admitted that they sometimes find pigeons dead inside the cages during their weekly checks, but said it’s not because of neglect on their part.

“Sometimes a hawk will get inside and kill them,” Arthurs said. “That’s kind of all natural.”

As for the barriers, Arthurs said they’re partially to stop people from tampering with the cages and partially to protect the birds from water dripping from the ceiling or other elements.

He said if the weather drops below zero, they leave the cages open as they know the water bowls inside will freeze over. They don’t have a system in place yet for hot weather, as they haven’t worked a summer for TransLink yet, Arthurs added.

He said he couldn’t comment on the exact number of pigeons that have died in his company’s cages. They keep weekly records of their activities, but Arthurs said only TransLink can decide who to provide them to. TransLink agreed to give them to Black Press Media, but said they weren’t available at the time of publication.

A move toward birth control

Both emphasized that they are starting to move away from traps and towards birth control methods.

The BC SPCA pushed TransLink to pilot test OvoControl birth control in several stations for 18 months in 2019 and 2020 after similar complaints about trapped pigeons were brought forward.

BC SPCA chief scientific officer Sara Dubois said the results were exactly what they expected – the population stabilized. She said she was disappointed when TransLink chose not to continue with the long-term solution.

More than a year later though, Diakow said TransLink is now recommitting to the method and will have permanent OvoControl dispensers in some SkyTrain stations come summer.

TransLink is reinvesting in birth control dispensers at some of its SkyTrain stations this summer, to help control the population of pigeons. (Credit: TransLink)

(TransLink is reinvesting in birth control dispensers at some of its SkyTrain stations this summer, to help control the pigeon population. (Credit: TransLink))

TransLink also uses bird spikes, netting and low-charge electric strips to deter pigeons from roosting in stations. Diakow said their main concern is the potential for bacterial infections from the birds’ droppings, but that pigeons are also one of a number of animals that regularly set off TransLink’s highly sensitive intrusion alarms.

In 2021, Diakow said wildlife set off the alarms 544 times, resulting in between 12 and 20 hours of transit delays. He said it’s impossible to know how many pigeons alone were responsible for.

Feeding wildlife is feeding the problem

He and Dubois said a large part of the problem is people drawing the pigeons to the stations.

“There’s these regulars that always show up and feed the birds,” Diakow said.

Often times, he said they do so just off TransLink property, so staff can’t actually do anything about it.

Diakow said they’re looking into putting up signage at the stations.

As for Ahmdz, she said she’d like to see Vancouver create pigeon aviaries as some cities in Europe have done. She said seeing the cages on her commute everyday is having a serious impact on her mental health.

“The entire day at work I have anxiety,” she said.

Her petition has been signed by more than 2,000 people as of Thursday afternoon.