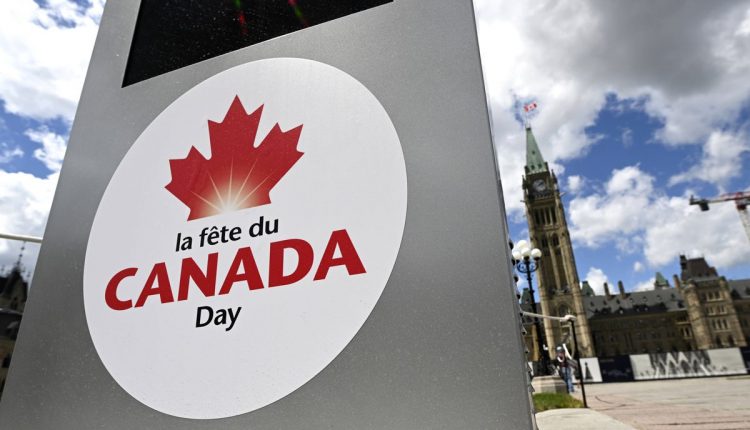 Ottawa police say they are preparing for protests at this week’s Canada Day celebrations, and planning to balance the rights of protestors and those celebrating the holiday.

“We will not, however, accept unlawful behaviour,” Steve Bell, the interim Ottawa police chief, told a news conference on Monday.

Mr. Bell said the police are rallying public-order units, traffic teams and tow trucks and will take “decisive and lawful action” to deal with threats, occupation attempts and other unlawful action.

The city has been the scene of several large demonstrations since supporters of the self-described freedom convoy occupied the downtown core for three weeks in January and February. Now there are concerns about new anti-government protests during Canada Day.

Celebrations in the national capital have been moved from the lawn of Parliament Hill due to reconstruction work on the House of Commons and will be held at LeBreton Flats, west of the downtown core.

“We expect there to be demonstrations. This is a right of all Canadians and it will be protected. We will not, however, accept unlawful behaviour and we will not allow vehicle-based demonstration in the motor vehicle control zone,” said Mr. Bell.

The zone refers to an area of downtown Ottawa being established over the Canada Day weekend to prevent the movement of vehicle protests in the area.

”Visitors and community members will see a significant police posture and presence throughout the city,” said the interim chief.

Mr. Bell said officers from the Ottawa police have met with affected community groups in the city affected by the “illegal occupation of our streets,” and take the harm and trauma residents suffered very seriously, and have considered it in planning for Canada Day.

Police liaison officers have also tried to reach out to protest organizers about expectations for appropriate, lawful protest, he said.

Mayor Jim Watson offered a warning to prospective protesters. “There are not going to be warnings and second chances. If the law is broken, regardless of who breaks it, there will be consequences,” he told the news conference.

In late April, the Ottawa Police Services Board approved a request from Mr. Bell to appoint up to 831 RCMP officers to help with the Rolling Thunder motorcycle events, and made those appointments valid until July 4.

Meanwhile, a community group called the Ottawa People’s Commission on the Convoy Occupation officially launched Monday with the appointment of three commissioners to hold public hearings on the convoy occupation of the city earlier this year.

The commission, according to a statement, has secured the support of the Centretown Community Health Centre as its anchor agency and fundraising portal and it will deliver a final report within a year. The OPC will be funded by donations from the public, foundations, businesses, unions and local agencies.

“We need this independent, non-partisan inquiry to hear from ordinary citizens, advocacy organizations and social agencies, business owners, workers and others whose lives were turned upside down during the occupation,” said commission spokesman Ken Rubin.

With a file from The Canadian Press.

This is the daily Politics Briefing newsletter, written by Ian Bailey. It is available exclusively to our digital subscribers. If you’re reading this on the web, subscribers can sign up for the Politics newsletter and more than 20 others on our newsletter sign-up page. Have any feedback? Let us know what you think.

LABRETON CONCERNED ABOUT CPC DIRECTION – A former Conservative Senate leader is expressing concern about the direction Pierre Poilievre is taking the party, worrying the Tories might be reaching the point of “fracturing beyond repair.” Story here from Global News.

FREELAND TOUTS BALANCE IN INFLATION STRATEGY – Finance Minister Chrystia Freeland says she must strike a balance between helping Canadians suffering from the effects of inflation and pursuing a policy of fiscal restraint – or risk making the cost of living problem worse. Story here from CBC.

TASK FORCE STRUCK TO DEAL WITH IMMIGRATION/PASSPORT ISSUES -The federal government has created a special task force to help tackle the major delays with immigration applications and passport processing that have left Canadians frustrated. Story here from CTV.

MENDICINO “DEEPLY COMMITTED” TO RCMP OVERSIGHT – The federal Public Safety Minister says he is “deeply committed” to enhancing oversight of the RCMP by strengthening the role of the national police force’s management advisory board. Story here.

BECK TO LEAD SASKATCHEWAN NDP – Saskatchewan’s NDP has chosen Carla Beck to be its new leader, making her the first woman to lead the party in 90 years. Story here.

FORMER LEADER DONATED $300,000 TO NEWFOUNDLAND AND LABRADOR TORIES – Ches Crosbie, the former leader of Newfoundland and Labrador’s Progressive Conservative Party, donated $300,000 to the party last year – more than 40 per cent of its overall income – as it waged a drawn-out and controversial election campaign that was thrown into chaos by the COVID-19 pandemic. A political scientist, however, says the situation is further proof that Newfoundland and Labrador’s elections rules are in need of an overhaul. Story here from CBC.

CAMPAIGN TRAIL – Scott Aitchison is in the Ontario community of Corbyville on Monday taking part in the Conservative Leadership Meet & Greet hosted by the Hastings-Lennox and Addington Conservative Electoral District Association. Patrick Brown is in also in Corbyville, Belleville and Richmond Hill on Monday. Jean Charest is also in Belleville on Monday. There was no campaign information available for Roman Baber, Leslyn Lewis and Pierre Poilievre.

MACKAY BACKS POILIEVRE – Pierre Poilievre says, in a tweet, that Elmer MacKay is backing him for the Conservative leadership. Mr. MacKay was a cabinet minister under former Progressive Conservative Prime Minister Brian Mulroney. He is the father of Peter MacKay, who was a cabinet minister under Conservative prime minister Stephen Harper, and who also sought the Conservative leadership in 2020. “Pierre’s message of affordability and freedom is resonating widely,” Elmer MacKay said in a statement attached to Mr. Poilievre’s tweet. “I know he has what it takes to be our next Prime Minister.”

The House of Commons is not sitting again until Sept. 19. The Senate is to resume sitting on Sept. 20

DUCLOS IN MONTREAL – Health Minister Jean-Yves Duclos was in Montreal to make a funding announcement on long-term care in Quebec.

FORD MEETS TORY – In Toronto, Premier Doug Ford met with Toronto Mayor John Tory at Queen’s Park, with the pair scheduled to hold a joint news conference after their discussions.

GOULD IN WINNIPEG – Families Minister Karina Gould is to make an announcement, in Winnipeg, with Manitoba’s Education Minister Wayne Ewasko on increasing licensed child-care spaces and the implementation of a wage grid for the child-care work force.

ALGHABRA IN OSHAWA – Transport Minister Omar Alghabra was in Oshawa, Ont., to announce about $14 -million for an expansion project at the port of Oshawa.

On Monday’s edition of The Globe and Mail podcast, Hannah Sung, co-founder of Media Girlfriends, host of the podcast At The End of the Day and BTS fan, explains what makes the superstar K-pop group BTS so popular and why they’re so influential. BTS announced recently that they are taking a temporary break as a group and pursuing individual projects. This moment was a big deal for their millions of fans worldwide, the company that brings in billions of dollars managing them and for South Korea, which considers its members cultural ambassadors for the country. The Decibel is here.

No schedules released for party leaders.

Fifty-two per cent of Canadians are pessimistic about the future of Canada, a considerably higher finding than responses in recent years, according to new research by the Angus Reid Institute. Meanwhile, in the Conservative leadership race, MP Pierre Poilievre continues is the most appealing option to 26 per cent of Canadians, followed closely by former Quebec premier Jean Charest (21 per cent). Details here.

The Globe and Mail Editorial Board on how francophones outside Quebec became the minority English Canada forgot about: “The Quebec government of Premier François Legault has been criticized, and with good reason, for invoking the notwithstanding clause to curtail the rights of the province’s English-speakers in his flagship language reform, Bill 96. It’s no excuse – as Mr. Legault sometimes falsely suggests – but francophones outside of Quebec often face an even less hospitable reality. Without succumbing to issue-dodging whataboutism, or pretending that two minority communities wronged somehow makes it all right, it’s worth reflecting on the perennial battle for survival waged mostly under the radar in Shediac and Sudbury and St. Boniface. Too often, a basic level of respect eludes French-speaking communities in the Rest of Canada.”

John Ibbitson (The Globe and Mail) on how it’s time for Canada to get serious about defence: “The Liberal government’s $4.9-billion commitment to modernizing NORAD represents an important step in preparing Canada for this increasingly dangerous world. But it’s only a start. With threats to the left of us in the Indo-Pacific, to the right in Europe, and with Russia to our north, this country must get serious about defence.”

Richard French (Contributed to The Globe and Mail) on how the PMO wields too much power in Ottawa: “Similar criticisms have been heard in Ottawa since the arrival of the current government. But perhaps there is a novelty here. I would argue that, while the centralization of power in Westminster prime ministerships always reflects the personal character and desire of the person in the office, in our case today, the person in the office does not want to dominate his government. He wants the Prime Minister’s Office to dominate it for him and is quite content to be its creature. What we have in Ottawa is the Justin Trudeau Regency.”

Fahad Razak, Arthur Slutsky and David Naylor (Contributed to The Globe and Mail) on how we need new strategies to tackle COVID-19 this fall: “But governments also need a new storyline – one that celebrates the effects of vaccines in preventing serious disease and death, while acknowledging the declining marginal yields of repeated administration of current vaccines when it comes to preventing infection with later variants. That shift explains evolving vaccine mandates and underpins the case for vaccines currently in development and regulatory review. It’s also counterproductive to talk about two doses as “full vaccination” – the number of vaccine doses needed for protection against serious COVID-19 varies by age, health status and circulating variant. Public-health restrictions must also evolve. Not because of the lies being told about their past ineffectiveness, but because every effort should be made to avoid broad-brush restrictions on public gatherings, as well as school and business shutdowns.”

Vaughn Palmer (The Vancouver Sun) on why B.C. Premier John Horgan may defy speculation and lead the B.C. NDP into the next provincial election: “One can readily imagine why Horgan might have decided to go. He’s been through a lot on the health front. He’d be leaving the NDP in a strong position in the opinion polls and with two years to regroup under a new leader. But it is easy to come up with a rationale for a decision to stay. He loves the job, leastways he has done so up to this point. There’s no one waiting in the wings with his communication skills and populist touch. The government faces huge challenges with inflation, the crisis in health care, and public sector bargaining. His rivalry with B.C. Liberal leader Kevin Falcon is personal. Horgan would like to beat him, not have people think that he walked away from a fight. The latter scenario is the preferred one for most New Democrats.”

Got a news tip that you’d like us to look into? E-mail us at [email protected] Need to share documents securely? Reach out via SecureDrop.