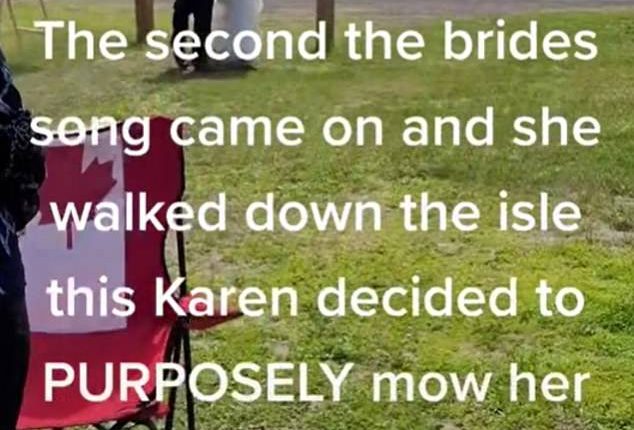 By Melissa Koenig For Dailymail.Com

A viral video documents the moment a neighbor decided to ruin a wedding by mowing her lawn as the bride walked down the aisle.

The video, posted to TikTok by user vampyyric on June 11, shows a beautiful bride walking down a grass aisle with her father as a buzzing sound could be heard.

It then cuts to the bride and groom holding hands under a canopy overlooking the water in New Brunswick, Canada.

As the preacher says, ‘You’re loving and faithful husband, in plenty -‘ the buzzing noise could once again be heard.

Vampyyric then panned the video across the street, where a woman in a dark hat, light shirt and dark pants was noisily mowing her lawn – with an apparent weed whacker although there appears to be lawn mower behind her.

The woman even looked up at the videographer at one point before the video ended.

Vampyyric wrote on the video: ‘The second the bride’s song came on and she walked down the aisle, this Karen decided to PURPOSELY mow her lawn and yell at us to ruin the wedding.

‘She continued through the entire wedding, and we could not hear the vows, etc.’

Vampyyric also wrote in the caption: ‘Yes, we went up to her, no she was not kind.

‘Some people are just rude like that. It’s truly unfortunate.’

The video has since gone viral with more than 328,200 views, and over 1,500 comments – many of which called for retribution.

One TikToker with the username Calimac00, for example, said they ‘would have cranked up the music later that evening.

‘She probably just hates herself and [her] life,’ the TikToker wrote, to which another apparently called the woman Mrs. Haversham – a character from Charles Dickens’ Great Expectations who was left at the altar and now insists on wearing her wedding dress for the rest of her life. 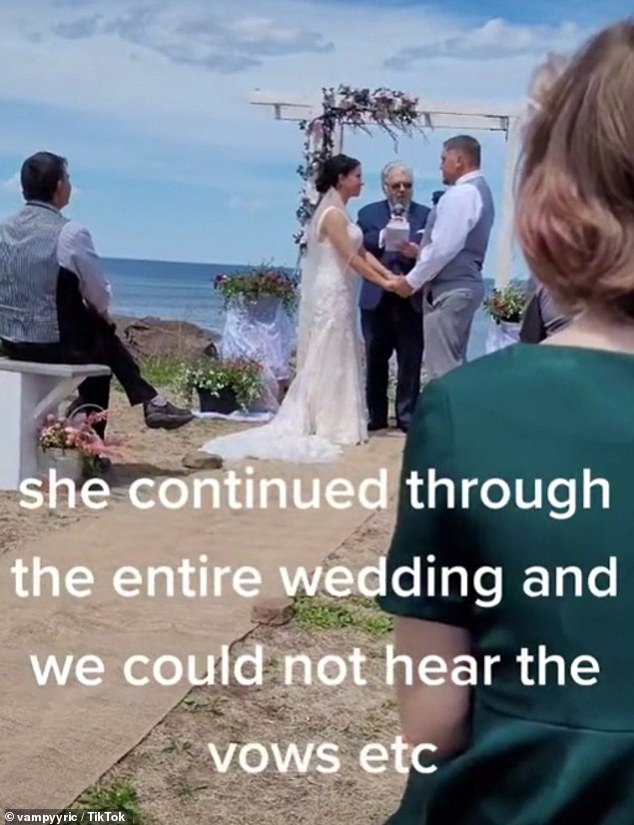 The buzzing noise could be heard as the happy couple exchanged vows, with the user who posted it, Vampyyric, writing that the audience could not even hear them 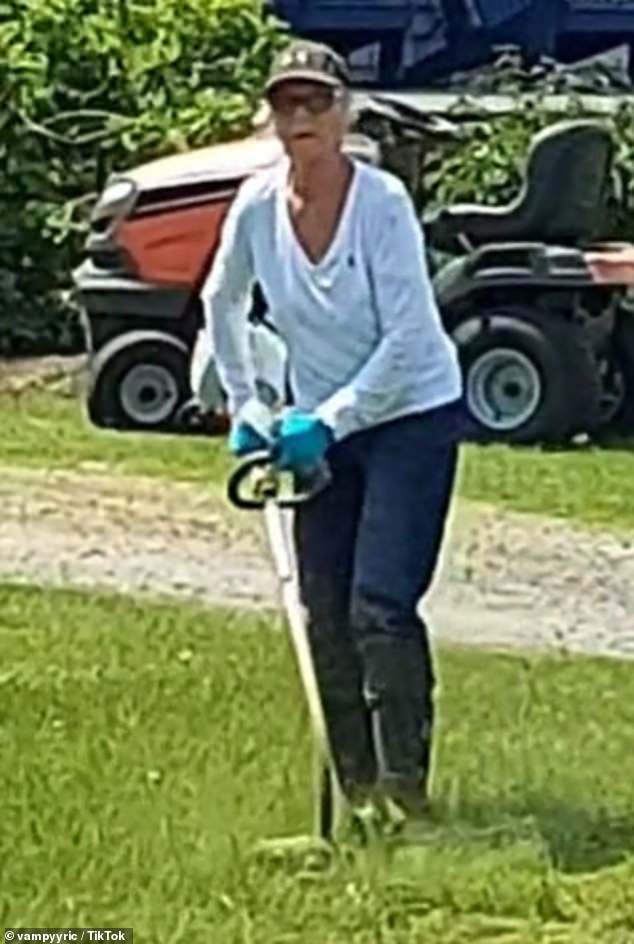 The video, which has garnered over 328,200 views, ends with the woman looking up at the videographer as she apparently mows her lawn with a weed whacker

Mama’s watching said they would be ‘committed to randomly ringing her doorbell at 3am at least once a week for eternity,’ while Tracey commented: ‘I would literally exact revenge at a later date when she least expects it.;

Brandon Fenton added that revenge would be ‘worth the minimum jail time and assault charge,’ and a user named Paul Ryan wrote: ‘Everyone should have crossed the road [and] stood still staring at her, then gave her a round of applause.’

Vampyyric replied to that comment, writing: ‘Some of us actually did, lol.’

But others seemed sympathetic to the woman, with one person saying she would have offered the woman some flowers ‘said her heart must really be hurting and I hope she has a better day. Even offer a hug.’

And a user with the username AC said: ‘That’s something you have to accept when you don’t pay for a venue though.

‘It’s here property, she didn’t agree to a wedding.’