Gripping the long branch of a speckled alder tree, ecologist Deborah Landau slowly steps into the waist-deep murky water. “You can’t see anything, so watch your step,” she warns as she makes her way through the chilly labyrinth of the Finzel swamp preserve in Maryland. The swamp is a meditation for the senses: the sweet aroma of red spruce, the call of the locally rare alder flycatcher and an array of color in what appears as endless blueberry and rhododendron shrubs.

The preserve, owned by The Nature Conservancy (TNC) in the central Appalachians of far western Maryland in the US, protects a rare boreal fen. Its most notable resident is the American larch (Larix laricina), or tamarack tree, a deciduous conifer that is the reason for Landau’s sojourn in the swamp. Lying within a “frost pocket” – a microclimate where cold air is trapped by the adjoining slopes and subject to frequent frosts – Finzel swamp provides a favorable year-round climate for the locally endangered larch and other more northern flora and fauna. It is as if a piece of the Pleistocene survived the warming epoch to remind us what life was once like in these ancient mountains.

We started seeing regeneration of the larch about two years after we created the openings. It was very exciting Deborah Landau, conservation ecologist

Due to changes in climate and water conditions, the larch has been lost at four sites in western Maryland. The only other population this far south – the tree is native to Canada and found in the upper northeastern US – is within the Cranesville swamp on the Maryland and West Virginia border, also owned by TNC.

“Finzel was one of the first sites I worked on when I started at TNC because it was a high-priority site for restoration, but the larch were slowly dying,” says Landau. Homes at either end of the reserve and a road that crossed the swamp had changed the natural flow of water. Standing water was killing the larch, but repeated attempts to clear beaver dams from culverts under the road had been unsuccessful.

Eventually, the homes were bought and removed and the road was re-engineered by replacing three large sections with bridges. Natural water flow was restored through the swamp, but the beavers began to build dams underneath the bridges. While the benefits of beavers as a keystone species are well-known, their dams can prove problematic. 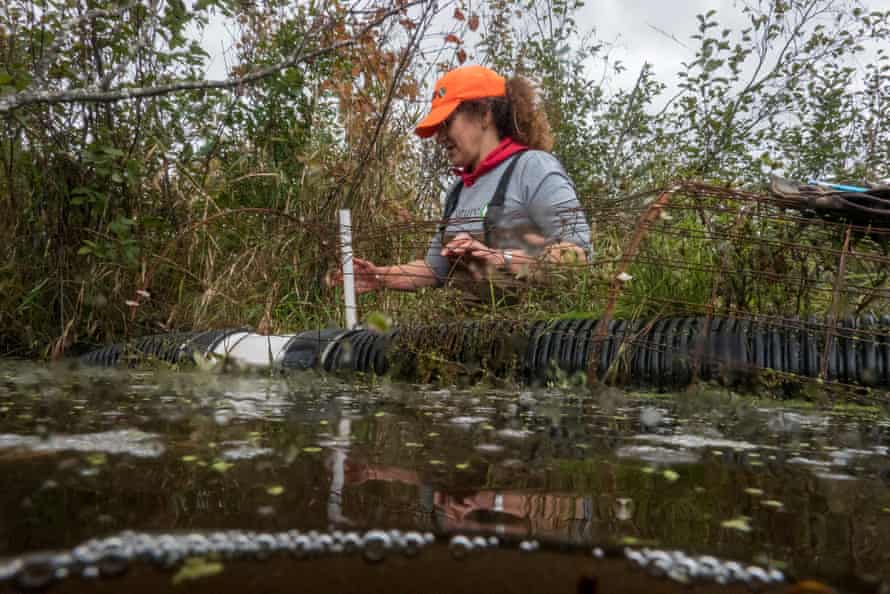 Landau cleans out a beaver baffle. Without these baffles to divert water over the dams the larch trees would flood, preventing regeneration. Photographer: Mark Hendricks

“We regularly visit the swamp to do maintenance on our beaver baffles,” says Landau. Baffles are long pipes used to mitigate the negative effects of beaver dams, such as flooded roads, damage to property and, in Finzel, preventing larch regeneration. The pipes divert some water to flow through the dam without breaching it and maintain the natural ecology of the wetland. Dams built under the bridges, however, must be removed. “Otherwise, the beaver dams cause the water to back up and flood the larch,” says Landau.

While a return to the more natural water flow benefits the entire swamp and prevents the larch from perishing in floods, the trees also need space to regenerate.

“I’d walked all the way across the swamp and found no signs of larch regeneration,” recalls Landau of her first trip to the swamp. “The shrubs were just too thick, even in areas not in standing water.”

Initially, three openings were made under mature larch. The shrubs had to be cleared in the middle of winter when the swamp was frozen because of the threat of high water. Only after the road restoration was complete and water levels had dropped was Landau able to check the trees’ progress in the clearings. Fortunately, the fruits of this “wild gardening” technique were successful.

“We started seeing regeneration of the larch about two years after we created the openings,” says Landau. “It was very exciting!” 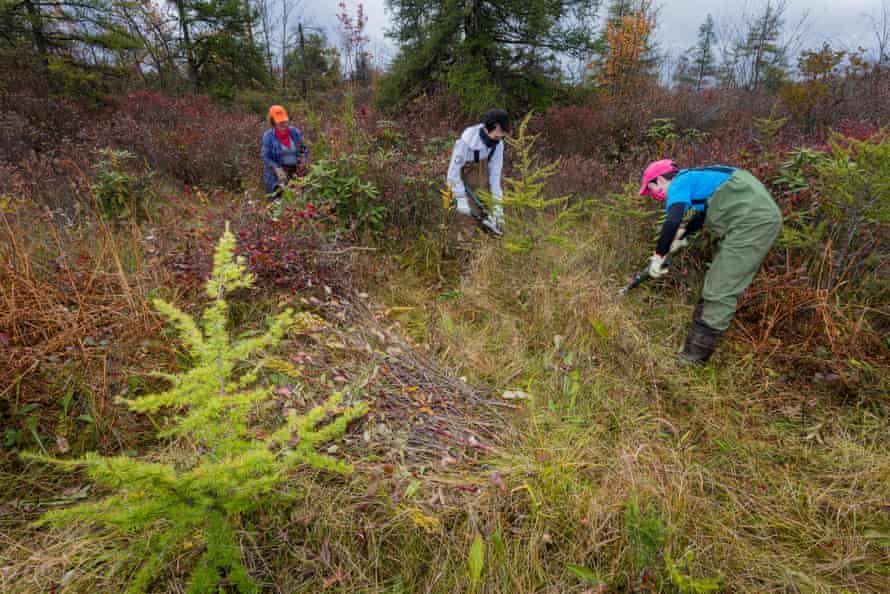 The problem with shrubs is they grow back – and fast – which means the work must go on.

To reach the larch clearings, Landau and her team must travel through thigh-deep swamp and almost impenetrable alder thickets. Once they arrive at an opening, the shearing and pruning begin. Soon, large mounds of shrub trimmings appear next to the larch and swamp ferns.

The regeneration is unmistakable in the clearing Landau is visiting today. She points to some young, almost two-metre tall trees near a mature, larger larch. She also discovers a very young tree reaching slightly above ankle height. Some are beginning to show the rich golden needles of autumn, the larch’s most notable characteristic.

Regeneration has not been seen anywhere else in the reserve other than the openings. This suggests that the swamp structure has changed so much that the larch is unable to regenerate on its own without Landau and her team maintaining the openings.

Landau is also re-establishing Finzel’s red spruce population, the reserve’s other northern conifer. A University of Vermont study found that the populations at Finzel and Cranesville swamps have extremely low genetic variation, due to isolation. Now, locally collected spruce seedlings have been planted in both reserves. 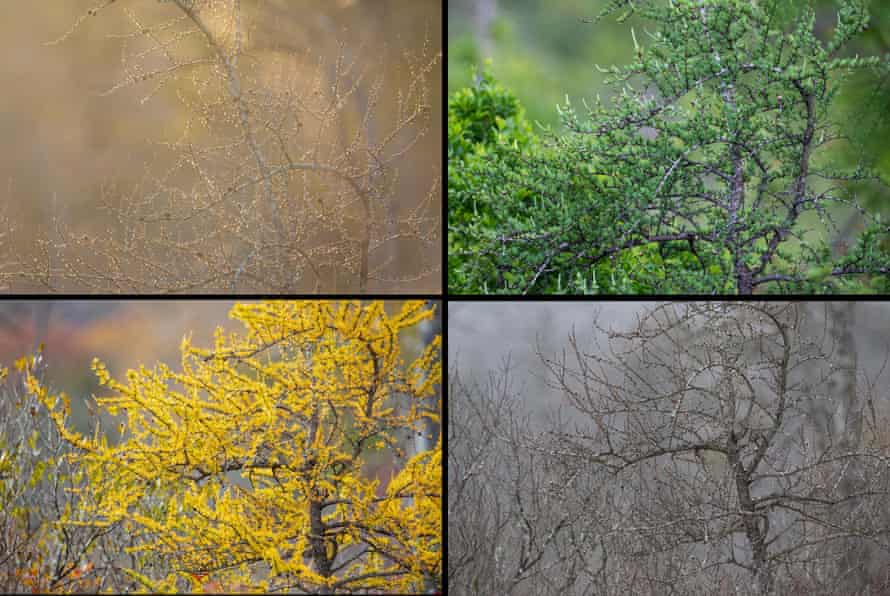 It is hoped the spruce will do as well as the larch. “Seeing the larch return to the openings has made all the work we’ve done worth it,” says Landau.

“Knowing that the trees are viable and all they need is a little help from us to clear the way, gives me a deep sense of satisfaction that I’m one of its caretakers, and that we’re doing the right thing.”

Find more age of extinction coverage here, and follow biodiversity reporters Phoebe Weston and Patrick Greenfield on Twitter for all the latest news and features