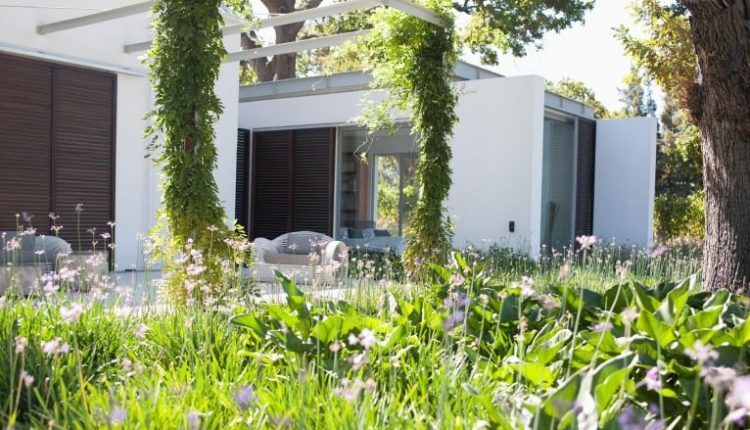 The case for leaving the perfectly manicured lawn behind

North Americans have had a longstanding love affair with crisp blades of grass and the perfectly manicured lawns we shape them into. The tidy turf tradition isn’t homegrown though: the concept was hauled across the Atlantic by colonists who maintained lawns in Europe going back to the 17th or 18th century. The growth became a staple of the leisure class who reveled in lawn games like croquet and tennis and turned it into a status symbol, since bringing neatness to nature’s chaos required deep pockets. And so, keeping up with the trim-turfed Joneses began.

Though its shorn blades are a bare-footer’s dream and the smell of it freshly cut may be inseparable from summer nostalgia for many, a pristine lawn comes with a whole whack of taxing environmental impacts.

The fertilizers and pesticides we put on lawns can create runoff that pollutes surrounding bodies of water. In surface waters like lakes and reservoirs, the nitrogen and phosphorus contained in these products can lead to oxygen-choking, light-masking overgrowth of algae and other plants. The monoculture, free of wildflowers, shrubs, dead wood and trees, is also not ideal for wildlife. It provides neither shelter nor nutrition for flittering pollinators like bees, butterflies and birds that help plants reproduce, creating more vegetation — our food.

Lawns also require a huge amount of water to maintain, a mounting concern during increasingly dry summers. And they’re omnipresent in Canada: according to the David Suzuki Foundation, there are approximately 6.2 million lawns across the country.

“[We pour] an obscene amount of drinking water onto our lawns to make them green because they’re the wrong,” says Jode Roberts, senior strategist at the Foundation. He notes that Kentucky bluegrass, one of the most common commercially available turfgrass species in North America , is a species brought over by colonists.

As a result, Roberts says, our lawns spend a large chunk of the summer on “life support,” browning and dying in peak season because the grass isn’t living in its ideal climate.

There’s an indication that we’re taking more interest in our yards, and for at least some, in making them more varied. The run on garden supplies in recent years speaks to the enthusiasm people have for gardening at this time, perhaps driven by spending much more time in their homes over the course of the pandemic. And with heightened environmental concerns, diverse, non-lawn-focused garden landscapes are trending too.

Roberts leads the David Suzuki Foundation’s Butterflyway Project, an endeavor that aims to enlist communities to help plant more pollinator-friendly flowers, patches and pathways across Canada. In the spring of 2020, he saw participation in the program increase exponentially. “I think we’re on the edge of a big shift with lawns … seeing it as an ecosystem or habitat rather than just as turf that has a single utility and is kind of an ecological desert,” he said.

Growing native plants is a crucial step in turning our yards into living ecosystems, since they’re the appropriate food source for the critters and pollinators that call them home. Plants tend to grow more easily in their intended environments, and require less care and resources as they sprout, too.

Though many campaigns promoting pollinator-friendly gardening have appeared well-intentioned, not understanding the importance of place has led to flubs. In 2017, General Mills’s Bring Back the Bees campaign distributed a mix of wildflower seeds across the US, including seeds from the California poppy that’s classified as an invasive species in some southeastern states, and the forget-me-not that’s banned in Massachusetts and Connecticut .

Part of getting better acquainted with our backyards means carefully considering which plants to embrace — and which ones we yank. No Mow May, a campaign created by UK conservation charity Plantlife and promoted by the David Suzuki Foundation, encourages people to leave their mowers locked up until spring is done springing. The idea is to give plants often considered weeds a chance to grow, including one tenacious species that’s been the scourge of many lawn-lovers: the bright and multi-talented dandelion.

“There’s this vilification of dandelions historically, and it’s funny [considering] Europeans brought over dandelions because they were medicinal and useful,” said Roberts. “They ate the greens and made tea.”

Aside from adding a pop of yellow to landscapes, dandelions — like their fellow “weeds” burdock and clover — can loosen overly compacted soil with their strong roots. They’re also an important food source for pollinators in early spring when there’s relatively little for them to eat.

A landscape solution that addresses many of these concerns is xeriscaping: landscaping with minimal water use in mind. Gardeners will often opt for drought-resistant plants to achieve this aim, as well as indigenous species that will better thrive in their yards. According to supporters of water-wise landscaping, a xeriscaped yard has the potential to cut lawn water consumption in half.

This approach may help reduce runoff too. “The more natural that landscape is … the more likely water is going to be able to soak into that landscape [rather] than rushing off and causing havoc with the local receiving water body,” said Roberts.

A passive approach to our yards can also be a much more environmentally friendly one. In his co-authored book Redesigning the American Lawn, associate dean at the Yale School of the Environment Gordon T. Geballe puts forth the idea of ​​the “Freedom Lawn,” which we don’t water, only mow sporadically, and maintain without pesticides and fertilizers.

“The lawn is designed to do pretty well in a drought situation,” said Geballe. “Grass itself doesn’t have too many diseases. The pesticides you put down aren’t to kill the disease on the grass — [they’re put there] to kill the weeds. There are some animals like grubs, moles and things like that, and so you can get insect pathogens or mammal pathogens, but there’s really no need for the weed pesticide.”

Of course, for those of us accustomed to the traditional lawn, letting the weeds grow may be easier said than done — particularly when we’re looking to impress. But Geballe explains that lawns’ resilience means they’re never far from resuscitation: “If you’re going to sell your house or have a wedding and you want the perfectly green lawn, fine, you can get it any time you want. You just have to — three months before your wedding — apply the pesticides and fertilizers and water, and it will look great, no matter how bad it looked last year.”

Roberts acknowledges that many are still quite attached to the conventional manicured lawn. “It’s a source of status; if you’re not keeping your lawn immaculately trimmed, then you’re a derelict neighbour,” he said. But he also sees a cultural shift happening.

Roberts cites the changing perceptions around milkweed, which was on a noxious weeds list in Ontario until 2013. The tall wildflower that blooms in pink clusters is vital to have along the main monarch migration routes, in rural and urban areas alike. “It’s an essential food source for a butterfly species that was imperiled,” he said. As well, he points to a tangible case of citizen involvement: “Over the course of two or three years, we saw a lot of demand from individuals and also groups that wanted to plant milkweed, and then we saw garden centers and nurseries starting to provide milkweed on their shelves.”

Maybe a little recontextualizing is all we need to do to fully accept our yards’ wild sides. Geballe tells the story of Georgia resident Murray Blum who let his yard go wild to support insect species, many of which are are experiencing alarming declines. Neighbors were instantly displeased that the nearly half-hectare plot stood out from the surrounding neat green. Blum mitigated this problem by putting up a sign stating that his yard was a bird sanctuary, which tempered complaints.

Our impact on landscapes has been massive for millennia, since we started growing crops and shaping environments to fit our needs, permanently changing their courses. Roberts noted that beloved as they are, monarch butterflies would never have made it up to Canada in the first place if European settlers hadn’t cleared massive swaths of forest that turned into the meadows where milkweed bloomed.

Though we moved far to one side of the spectrum with our landscapes, it doesn’t mean we can’t recentre, rewild and do better by doing less. Plus, if a perfect lawn signals something about status, consider that a varied garden offers the opportunity to express our style, values, convictions and more. “In this world where we worry so much about environmental issues, it’s fun to have something that’s really under our control,” said Geballe. “Think of your home, the inside and the outside, as where you can express your environmentalism.”

Caitlin Stall-Paquet is a Montreal-based writer and editor whose work has appeared in The Walrus, the Globe and Mail, Elle Canada, enRoute, Canadian Geographic, Châtelaine and Xtra. You can follow Caitlin on Instagram and Twitter @caitlinstallp.

Evening Update: Extreme intoxication can be used as a defence for violent crime, Supreme Court of Canada rules