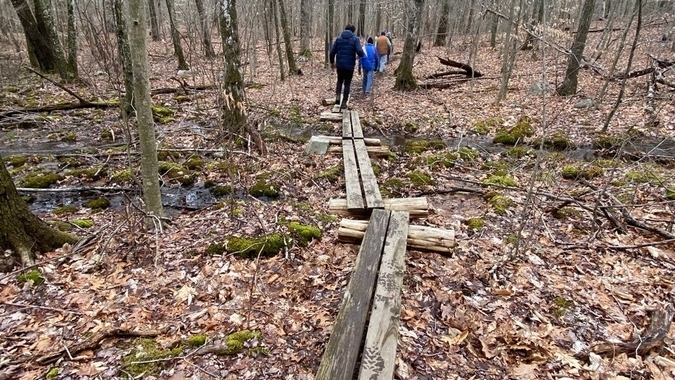 Hikers trudging through the forests of southeast Connecticut sometimes encounter debris reflecting an era when farmers rusted broken equipment in the field and buried their trash nearby. It can be unsettling to come across vine-covered plows and tractor parts strewn on stone walls that once surrounded grain fields and cow pastures, along with broken dishes and broken mattress springs that have worked their way through the ground outside of crumbled foundations.

Earlier this week, however, our small group came across detritus I’d never seen before on a hilly, winding path in North Stonington – warped sheet metal.

At first glance, they appeared to be the remains of a barn roof, but Bill Ricker, chairman of the city’s conservation commission and our tour guide, made it clear to us.

“These were enclosures for cockfighting,” he explained, noting that North Stonington was a hub for blood sports in the early 1900s.

“People would come here from Hartford, New Haven, Providence – anywhere,” said Bill. If either of us took the time to dig now, we would likely uncover tons of rooster bones, he added.

As soon as our band snaked past these abandoned death rings to fight birds, we entered the jungle again – as in Longfellow’s poem, a world full of murmuring pines, bearded with moss.

We were in week two of our socially distant hiking logs due to coronavirus: Driving separately to trailheads, marching individual files, at least two meters apart, not sharing a Gorp or taking group selfies.

As the pandemic has spread, the rules have tightened. Although an impending three-state quarantine has been put on hold, and parks and wildlife sanctuaries remain open for the time being – despite new restrictions announced this week – we now seem approaching a time where we may all have to settle our homes until the dust has settled, or at least dare to go out separately. We will adhere to government regulations as they evolve.

However, one of our goals this week was a new, roughly mile-long trail that runs through the Yawbux Valley from Wyassup Road to an intersection with the Narragansett Trail.

Maggie Jones, emeritus director of Denison Pequotsepos Nature Center in Mystic, looked at a leafy, damp ground and remarked, “This seems like a good place to find ramps.” These perennial plants of the wild onion family, too Called leek, they occur throughout the eastern United States in spring and are considered a delicacy in many Appalachian mountains.

There was a carpet of green shoots with red stems just below their feet, and Maggie plucked some from the ground.

“You can eat the whole plant,” she explained, putting one in her mouth and passing the others around.

A short distance away, Maggie pointed out another edible plant, the trout lily, also known as the yellow dogtooth violet. However, she warned against consuming another perennial shrub – the Indian sack, sometimes called hellebore or corn lily. The highly toxic plant has been used by some Indian tribes to test the vitality of their leaders, she said.

“Do not worry. I won’t eat anything, ”I replied.

After reaching the glowing blue Narragansett Trail, we returned to Wyassup Road via a slightly different route. If we had turned south on Narragansett, we could have traveled half a dozen miles to the top of Lantern Hill on the border between Ledyard and North Stonington. Navigating north and east would have brought us approximately 15 miles to the end of the trail at Ashville Pond in Hopkinton, RI

The new connection, which was completed last year, is contained in a map and a brochure with hiking, cycling and riding trails compiled by the Nature Conservation Commission. Free copies were available in various locations around the city, some of which are closed during the crisis. You can print your own copy using this link:

Bill, a former member of the Board of Selectmen, said when he moved to North Stonington 15 years ago there were only a handful of public roads in the city owned or owned by the state and the Connecticut Forest and Park Association in the Pachaug State Forest this were entertained ;; or from organizations like The Nature Conservancy and Avalonia Land Conservancy.

Thanks to the efforts of the Conservation Commission, the North Stonington Citizens Land Alliance, and other groups, as well as support from local taxpayers who have approved the purchase of real estate such as the 109-acre Hewitt Farm as open space, there are 27 trails like this today, cumulatively extending over more than 100 miles in town.

After returning to Wyassup Road, we hiked a few more miles of rolling hills, past stone ledges, streams, and spring pools, on a separate pair of North Stonington trails on nearby Reutemann Road: the 63 acre Erisman Woodlands and the adjacent 74 Acres of Babcock Ridge Reservation, both owned and maintained by the Avalonia.

In 2011, at the age of 102, Adele Erisman Avalonia donated 62 acres of woodland and gave her home and two acres of land to The Nature Conservancy, remaining her residence until her death in 2014 at the age of 104. A life well lived.

Fortunately, there are many other nonprofits who have donated land, money, and time to ensure that future generations can continue to enjoy freedom.

Check the websites or Facebook pages for updates on accessibility and new rules.

As always, stay safe and hike smart so we can continue to enjoy our public trails.