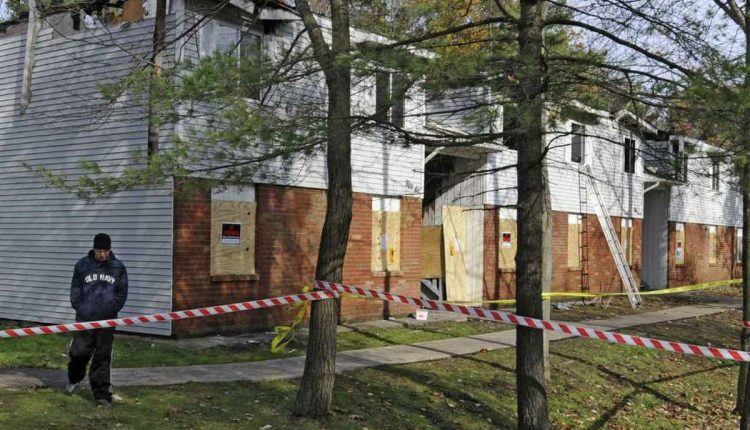 HALFMOON – In the 16 years since a New Jersey-based company bought Twin Lakes apartments, a complex of 729 units off Lakeview Drive, there have been 11 fires.

The owners have often explained away the frequency of blazes by saying many fires are tenants’ faults – such as the most recent blaze, in October, that displaced 26 people, which was determined to have been started by a cigarette.

However, a Times Union investigation into town code enforcement records shows that poor maintenance preceded five of the 11 documented fires since the Solomon Organization bought the complex in 2005 – including two chimney fires that happened more than three years after the town urged the owner to maintain all chimneys in the wake of another blaze.

Town officials repeatedly asked the apartment complex over the years to keep up on standard fire safety maintenance, such as when firefighters entered one building after a fire in 2015 and saw there were no smoke detectors in the units. But it would take months – or even years – for Solomon to acknowledge to town officials that they had brought apartments up to fire safety code, according to the records, with no evidence that the town ever applied legal pressure to force Twin Lakes into compliance, such as with court appearance tickets or fines.

There have been no fatalities as result of the fires, but seven buildings had to be rebuilt, with more than 42 units destroyed, and tenants have lost their belongings and homes.

After the October fire, town Supervisor Kevin Tollisen told the Times Union, “They’ve done good with the town. Any time improvements or updates need to be done, they work with the town. It’s very unfortunate, but we’re not concerned with the way they’re running the property.”

When asked recently if the supervisor would answer questions about the records the newspaper reviewed, Tollisen at first said that he does not talk to the Times Union. He agreed to answer a series of written questions – of which he responded to one. Tollisen said he is also satisfied by Twin Lakes’ performance.

“During my tenure, Twin Lakes has always responded and corrected any issues detailed by code enforcement,” Tollisen said. “If Twin Lakes or any other organization ignores the notices, appearance tickets are issued. Compliance is necessary and critical. But any time I have spoken with someone at Twin Lakes, they have been responsive and courteous.”

The Solomon Organization, which bought Twin Lakes in 2005, now owns more than 60 apartment complexes in eight states, with a total of about 18,500 residential units. Twin Lakes in Halfmoon consists of townhome-like rental units, which according to its website rent for between $796 and $2,586 per month.

Four years after Solomon bought Twin Lakes, a building was badly damaged by a chimney fire. Then Halfmoon Director of Code Enforcement Greg Stevens wrote to Twin Lakes afterward to direct management to improve maintenance so that such fires wouldn’t happen again. In that letter, he said the chimney fire was caused by poor maintenance and that there had been “multiple” fires in the previous four years also due to a lack of maintenance on bathroom heat lamps.

“The bottom line is that it is the responsibility of Twin Lakes Management to insure that all fireplaces in your development are maintained in a safe, working condition at all times. These fireplaces are part of the structure and it is not the leaseholders responsibility, nor are they responsible to contact you if they are going to use the fireplace,” Stevens wrote.

He attached several pages of building codes, describing what the Solomon Organization must maintain.

He also wrote that management told him there were too many chimneys to maintain – and that he rejected that excuse. The company proposed a compromise of fixing chimneys only when a tenant said they wanted to use the fireplace, and he said that wasn’t acceptable either.

Three years later in 2011, there was another chimney fire, which destroyed a 12-unit building. Again, town records said it was caused by a lack of maintenance. A chimney cap was dislodged, allowing an animal to build a nest inside, which caught fire and ignited the roof.

Letters in the town file in the days after that fire showed that management had decided to maintain chimneys only when a tenant said they wanted to use the fireplace imminently, despite Stevens’ earlier letter.

A Twin Lakes tenant wrote the town, chronicling how he asked for paperwork from Solomon confirming his fireplace was safe in response to the 2011 fire. After Twin Lakes did inspections and found a flue stopper needed repairing, he asked the apartment complex for written confirmation the fireplace was safe, but they refused.

The town responded that it was up to Twin Lakes to maintain the chimneys.

But instead of coming up with a maintenance program after the 2011 fire, according to town records, the Solomon Organization decided to board up the fireplaces. Then there was yet another chimney fire in 2017, destroying a six-unit building. 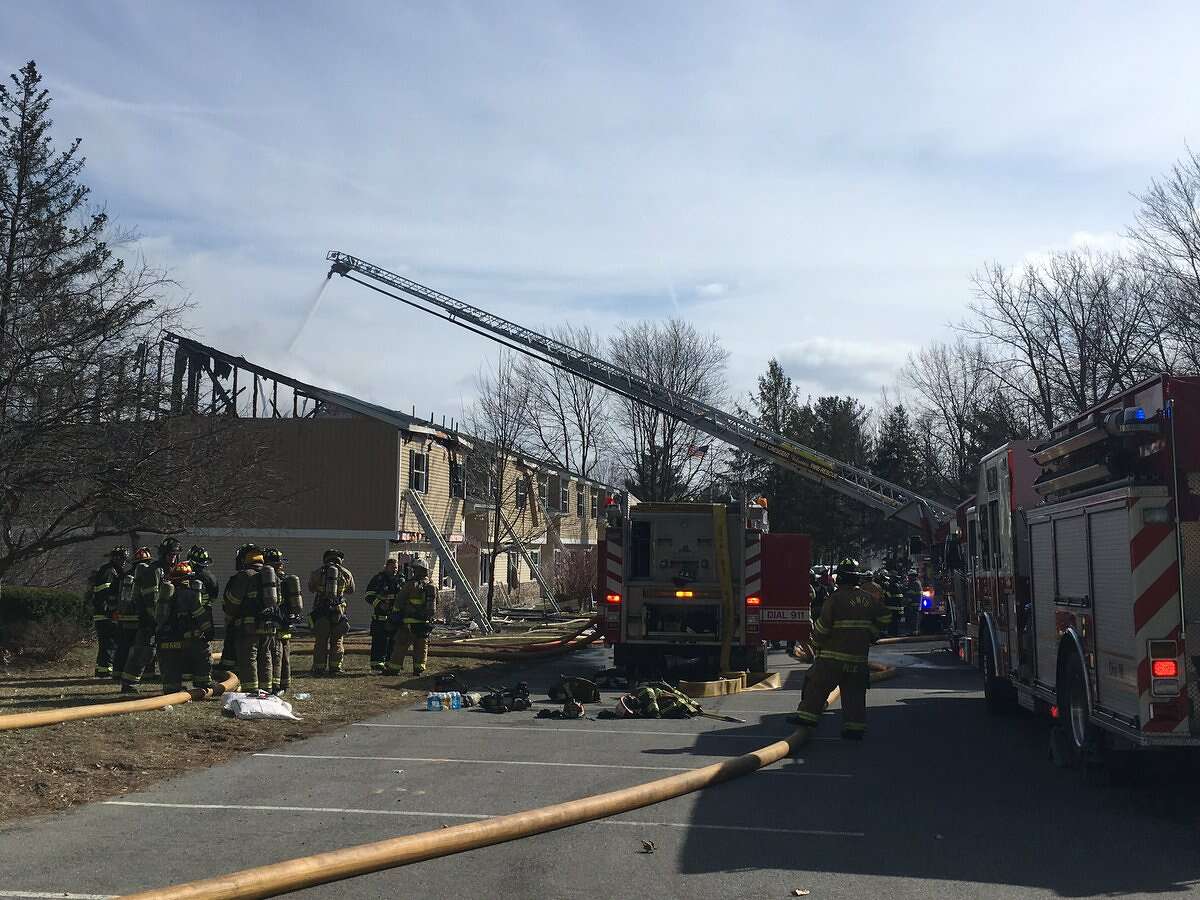 A building in the Twin Lakes apartment complex in Halfmoon was destroyed by fire Sunday, March 12, 2017 (Photo by Wendy Liberatore/Times Union)

2005: The Solomon Organization buys the Twin Lakes apartments in Halfmoon.

2008: After repeated fires, including a large chimney fire, the town tells Solomon to improve maintenance, especially of chimneys and bathroom heat lamps.

2017: A resident opened a boarded-up fireplace and set a fire, which led to a chimney fire that destroyed a six-unit building. Solomon begins bricking up fireplaces.

2019: A malfunctioning heat lamp catches fire, badly damaging the roof of a building. Solomon removes the rest of the heat lamps in the complex.

“We did not expect tenants would or could dismantle fireplace barriers and light fires – especially after having been warned that it was hazardous to do so.  And no one did for years.  But when one person did vandalize the locked gate to his fireplace and did light a fire, we bricked over the rest,” he recently told the Times Union.

In 2008, the town had also told Twin Lakes to start maintaining the heat lamps after minor fires caused by the lamps. Solomon Organization did remove the heat lamps from bathrooms entirely – but not until 11 years later in 2019 when the roof of a building was badly damaged by a heat lamp that caught fire when a timer malfunctioned.

“After the most recent incident, we determined that even though these (heat lamps) were popular, removing them also removed all doubt about their safety, so we did,” Simoncini said.

In responding to a Twin Lakes oven fire in 2015, Clifton Park Fire Department firefighters reported to the town that there weren’t any working smoke detectors in the unit, and there were others missing elsewhere.

In 2018, detectors in common areas between some units were also found missing during a town fire inspection. Again, they were flagged for Twin Lakes to replace.

In interviews with tenants this year, two people said they had removed detectors before from common areas because they wouldn’t stop beeping and maintenance would not respond to their calls.

Simoncini disputed those complaints, saying Twin Lakes “is not only adequately served by a full-time staff of 21 employees, it also is supported by 50 additional full-time staff throughout the Capital Region who can provide immediate back-up when needed.”

While tenants are known for removing smoke detectors in their homes, it is less common for them to remove detectors in the hallways outside. Keeping all the detectors working is a maintenance issue, said Saratoga County Fire Coordinator Ed Tremblay.

“It could be a matter of life and death. But people need to realize there’s maintenance to them as well. Battery changes, expirations,” he said.

Changing the battery on a hard-wired smoke detector is not easy, and some detectors now come sealed with a 10-year battery life. When they die, some of them beep incessantly, he said.

From 2015 to 2019, town officials failed Twin Lakes every year on its annual fire inspection because the complex did not get its fire suppression sprinkler system inspected, a mandatory task. Twin Lakes has to hire an outside inspection company to do the job and then give the town the report.

But in 2019 town officials realized no one (including Twin Lakes managers or themselves) had read the previous year’s report – which included a long list of problems. Twin Lakes said inspectors hadn’t pointed out the problems, despite the fact that staff were described as accompanying the inspector and management sent a copy of the report to the town. When the unresolved problems were discovered, town officials decided that the annual sprinkler inspection must be uploaded to an app, which automatically notifies the town of any deficiencies, Cooper said.

The new system under the app alerted the town that many items in the sprinkler system needed replacement. The town notified Twin Lakes, but the apartment complex did not do the needed fixes.

Cooper then threatened to write court appearance tickets. It was the only time, according to town records, that Twin Lakes was threatened with legal consequences over a fire safety issue. The apartment complex then fixed the issues.

State law now requires sprinkler systems in new apartments, so Twin Lakes has had to install the systems in the buildings it rebuilt after fires. 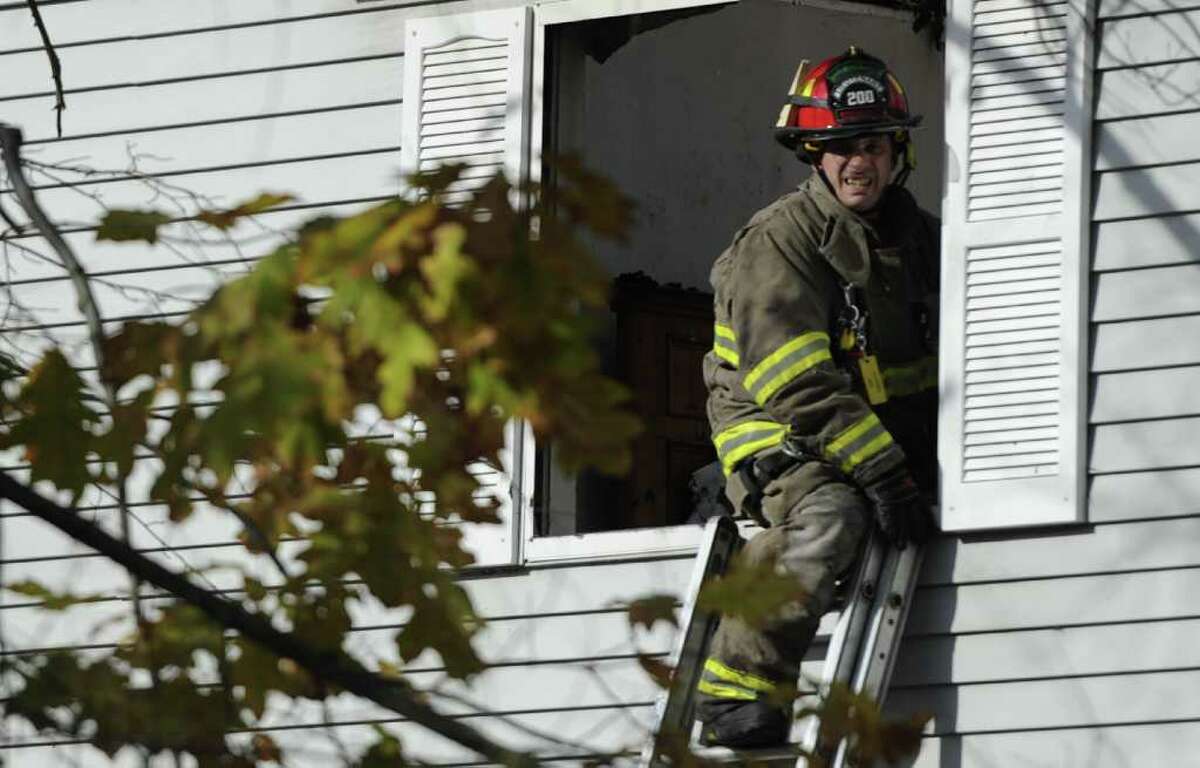 Twin Lakes also installed fire retardant foam over each unit’s stove, to prevent stove fires – of which there have been two in the last 15 years – and issues fire warning memos, it said.

“Each Twin Lakes tenant reviews and signs a three-page fire prevention lease addendum.  We inspect every apartment every year, assuring all of our fire safety equipment is functional.  During our inspection we utilize a thermal imaging device to monitor the electrical panels to detect prospective problems,” Simoncini said. “Given the number and depth of the proactive steps we have taken and our responsiveness to any and all identified conditions, fire prevention at Twin Lakes should be held up as the standard all property owners should follow.”

The Times Union went to Twin Lakes recently to talk to residents about how they feel about safety in their apartments.

Some tenants said management responds too slowly to serious problems.

“The maintenance never come, ever. If you call, it takes weeks and weeks to come,” said tenant Shuja Shaikh, who said he drove to  Solomon’s headquarters in New Jersey to get his unit fixed when no one would respond to his calls.

After the cigarette fire destroyed an entire building in October, tenant Heather Edgerton said she was planning to move.

“They don’t enforce the (no) smoking policy. Come on. This is ridiculous,” she said. “I am pissed. I’m looking at buying a house.”

Another tenant said she had personally watched four fires at units near hers in the years she has lived at Twin Lakes. It’s made her very aware of fire hazards. But when she reported that an outlet was loose and shorting out – and was the only outlet she could use for a medical device – it took four months and a call from her doctor to get it fixed.

On the organization’s Better Business Bureau page, numerous renters have complained this year about a slow response to maintenance requests and to getting security deposits back.

Solomon Organization, however, defended its history on fire safety – saying it has “a history of achieving compliance within a generally expedient timeframe.”

“As with most multi-family developments, Twin Lakes is party to a variety of interactions and exchanges about apartment conditions between staff and inspection authorities – from formal citations to informal advisories,” Simoncini said. “Our inspections are up to date, no outstanding violations exist and when we have identified fire threats we have proactively of our own accord enacted remediation programs.”