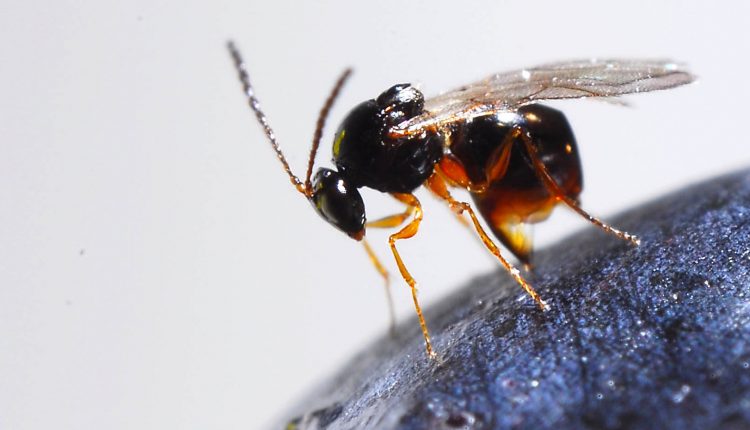 A natural control for an invasive fly that has plagued soft-fruit crops like Maine’s wild blueberries is being tested by scientists at the University of Maine.

In response, Phillip Fanning, assistant professor of agricultural entomology at UMaine, and his collaborators looked to nature for a solution. Ganaspis brasiliensis, commonly referred to as the samba wasps, parasitize SWD in its native range of Southeast Asia. The insects, which do not have stingers, are about the size of a grain of rice. Fanning released up to 1,000 samba wasps on wild blueberry fields in Hancock, Knox, Waldo and Washington counties this month after more than a decade of preparation.

”The threat of crop damage that SWD annually brings has been a great source of stress to our farming operation, and caused us to shorten our planned harvest window and hasten through our marketing season of fresh-pack berries,” says Nicolas Lindholm, a farmer at Blue Hill Berry Co. who is hosting one of Fanning’s wasp colonies.

“As certified organic growers for 25 years, we are especially interested in biological controls and really value the efforts and rigorous research that Dr. Fanning and the UMaine wild blueberry team have done in prioritizing this pest threat.”

Fanning’s lab, which is part of the Maine Agricultural and Forest Experiment Station that is run by the state’s R1 public research university, will assess the success of the introduction of this fall and spring, including the wasps’ ability to overwinter in Maine. He reared the wasps in his lab, and hopes to eventually establish a naturalized population in the state. Small populations of the wasps were previously detected in Washington and Canada, the product of accidental introduction just like SWD, indicating they may be viable in Maine.

The release is preceded by 12 years of research and permitting with the U.S. Department of Agriculture (USDA) and Maine Department of Inland Fisheries and Wildlife. Scientists studied the dynamics between SWD and samba wasps in their native range. They were also the focus of extensive laboratory study where the wasps were paired with every native species of drosophila, a genus of flies, in North America to ensure their release would not cause collateral damage.

Findings confirmed that samba wasps are SWD specialists. Rather than a stinger, the parasitic wasps wielded an ovipositor to lay eggs inside SWD larvae. When the wasp larvae hatch, they consume their host, breaking SWD’s life cycle. Preliminary data on the wasps show they can reduce SWD by 20% to 65%.

“Samba wasps have the potential to be a new tool in growers’ fight against spotted wing drosophila. This release finally brings biological control options for a true, integrated pest management approach to this pest,” says Fanning, who specializes in insect behavior and population dynamics on farms. “This will reduce the need to spray insecticides to control it, which is great for pollinators and lowers operating costs for farmers.”

The releases led by Fanning’s lab are part of a national response to SWD. The funding for the research comes from a number of national sources including a grant from the USDA Crop Protection and Pest Management program (Award No. 2021-70006-35312) that Fanning is leading in collaboration with researchers at Cornell and Rutgers universities. The project is also part of a USDA Specialty Crop Research Initiative (Award No. 2020-51181-32140) led by the University of Georgia that includes scientists from 10 states. The Wild Blueberry Commission of Maine also provides support for Fanning’s research.

“The wild blueberry research team at the University of Maine has dedicated their impressive talents and resources to combatting the invasive pest, the spotted wing drosophila for 10 years now. Ten years ago, Dr. Frank Drummond developed the research program to monitor and sustainably manage this pest. With his retirement, Dr. Phil Fanning took the reins and continues to build upon what Dr. Drummond started,” says Eric Venturini, executive director of the Wild Blueberry Commission of Maine.

“On behalf of the Wild Blueberry Commission of Maine, I am incredibly grateful for the dedication the university has demonstrated as they develop sustainable solutions to manage this pest. We are hopeful that the release of this SWD parasitoid could be a game changer for many wild blueberry farmers. If successful, It could help to decrease both spotted wing drosophila populations and the costs of management.”

Farmers, eager to ensure consumers don’t encounter SWD larvae in their fruit, invest heavily in preventing the pest. The interventions are expensive, the USDA estimates the nationwide cost to be $129–$172 million each year. Treatments are also limited to farmlands. SWD readily invade the raspberries and other native fruit that grow in Maine’s widespread woodlands. These noncrop habitats act as reservoirs where the pests can stage their invasions of croplands.

Fanning hopes the wasps will reduce the populations in noncrop environments, turning the tide on this ongoing battle for Maine’s berry growers.

“Our hope is that the species will be able to establish and proliferate across Maine, building up its populations on all the wild fruits that spotted wing drosophila attack in the forests surrounding our farms. This will reduce their impact on our crops and help cultivate a more resilient food system,” Fanning says.

Fanning’s releases coincide with the introduction of a bipartisan bill in Congress that would further efforts to contain the pest. Last week, Sen. Susan Collins announced that she was introducing the bipartisan Spotted Wing Abatement Trust (SWAT) Act with Michigan Sen. Gary Peters to establish a federal fund managed by USDA to support spotted wing drosophila research and mitigation.