When Scott Perry teamed up with Laura Lannigan to launch a lawn-care company on PEI she introduced him to electric.

He had experience working with gas-powered gear, but the electric fleet really impressed him.

“I wanted to do a lawn-care company, but I do care about the environment and I just wanted to make a difference,” Perry told Island Morning host Wayne Thibodeau.

“I thought, ‘Let’s try and put the two together.'”

They called the company Green Lawns.

‘Everyone sees the transition happening’

Operating gas-powered equipment with small engines can make a significant contribution to greenhouse gas emissions, Lannigan said. There’s also the chance of spills when refueling, and although those spills may seem small they can add up over millions of people filling their lawnmowers, she said.

But for the electric mowers, there are no fumes when they’re running or potential for spills when refueling.

With the price of gas this case, going electric seems particularly relevant, she said.

“Everyone sees the transition happening,” she said.

“And there’s a lot of people, it’s about the quiet too. They want to know how quiet it is in comparison, especially in very close together subdivisions.”

The company is saving a lot of money on gas, and it expects to save more on maintenance. 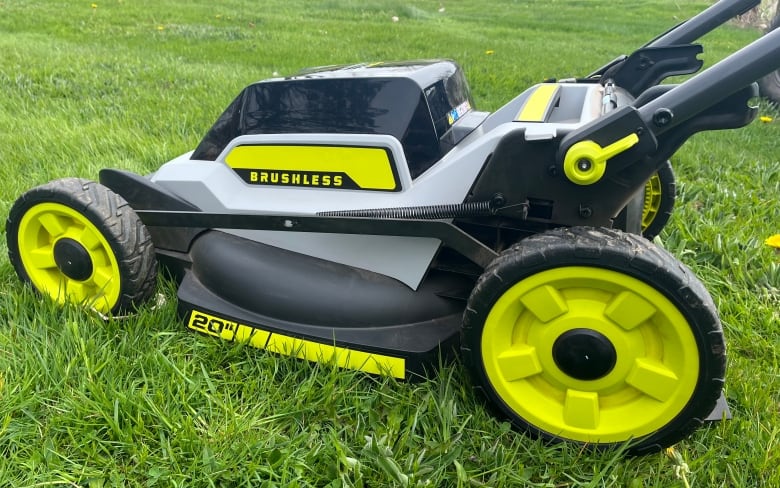 ‘We’re able to eliminate a lot of the overhead for later on down the road in expenses, without having those moving parts,’ says Scott Perry. (Wayne Thibodeau/CBC)

“We don’t have a lot of the maintenance costs that the conventional mowers have. There’s no belts, no pulleys,” said Perry.

“We’re able to eliminate a lot of the overhead for later on down the road in expenses, without having those moving parts.”

While the machines are more expensive to buy, given the amount they use them they expect to have their investment returned in one season. They also expect to pass on those savings to customers, they said.